Was Jesus Ever Afraid?

Was Jesus Ever Afraid?

Before God even created us, he knew our weaknesses. He knew fear was one of the biggest ways the enemy would attack our minds and attempt to derail the plans he had for us. It’s no wonder that Scripture tells us to “fear not” or “do not be afraid” over one hundred times. But what about Jesus, the person in the trinity who took human form? Was he ever afraid?

Before God even created us, he knew our weaknesses. He knew fear was one of the biggest ways the enemy would attack our minds and attempt to derail the plans he had for us. It’s no wonder that Scripture tells us to “fear not” or “do not be afraid” over one hundred times. But what about Jesus, the person in the trinity who took human form? Was he ever afraid?

The Bible tells us he was without sin, but we also see him experience human emotions. In Matthew 21:12 we see him angry because his Father’s temple is being used to take advantage of others in need. In John 11 we see him grieved over a dear friend’s death. But what about fear?

What Makes Jesus Able to Sympathize With Us: His Humanity

A few months ago, I entered a season of waiting with a major project I’d been working on, and found myself flailing between trust and worry. One minute, I was certain God had everything under control and was confident he would take care of hundreds of details I couldn’t foresee. The next minute, I was afraid the worst would happen, rehearsing every possible scenario in my mind.

When I enter panic mode, I know what I need to do. But my mind doesn’t always follow the spirit’s leading. Instead of getting into the Word and talking to God about it, I busy myself with other things and try to keep my thoughts off the source of my worry. I talk to others I think will understand the situation, and sometimes wind up even more anxious.

As I thought about these tendencies the other day, I asked myself, “Why don’t we start with God? Why is prayer often difficult when our mind are consumed with fear?” I think some of us wonder if he understands fear. He tells us not to worry, but we may question whether he can empathize with it.

A study of Scripture doesn’t show an instance where this exact word is used to describe Jesus’ emotional state. We know he was in constant communion with the Father, and always sought the Father’s will above his own. So if we want to know whether Jesus experienced fear, a good place to look is the moment where his desire wrestled with the Father’s will: the Garden of Gethsemane.

The Anguish of Separation

In Mark’s account, Jesus told the three disciples he brought with him into the garden, “My soul is overwhelmed with sorrow to the point of death” (Mark 14:34). All three gospels say he prayed to the Father not once, but three times, asking the cup be taken from him if there is any other way. Luke, the physician, is the only one to add a physical description, which gives us a vivid picture of the stress Jesus experienced just moments before his betrayal.

“And being in anguish, he prayed more earnestly, and his sweat was like drops of blood falling to the ground.” (Luke 22:44 NIV)

Although there is some speculation about whether Jesus was really sweating blood or Luke was using simile, a rare medical condition called “hematohidrosis” carries the exact symptoms Luke describes. Under extreme stress or anxiety, the blood vessels constrict and rupture, causing blood to go into the sweat glands. It makes sense that Luke, who was a doctor, would note this condition.

Jesus was about to experience something none of us will have to endure. Not only would he bear the weight of every person’s sin, but he would be separated from the Father. This disconnection was completely foreign to him, as he had been with the Father since before Creation.

Empathizing with All Our Weakness

When he came to the Father, he knew there was no other way. But he had to ask. Although he was fully God, he was also fully human. A human who felt every emotion you and I do. Even fear.

“For we do not have a high priest who is unable to empathize with our weaknesses, but we have one who has been tempted in every way, just as we are—yet he did not sin.” (Hebrews 4:15 NIV)

Would Jesus be able to empathize with those who are afraid if he hadn’t experienced the emotion himself? A dictionary definition of “empathy” tells us it is “the psychological identification with, or vicarious experiencing of the feelings, thoughts, or attitudes of another.” Empathy is taking a walk in someone else’s shoes.

I don’t know about you, but I have a difficult time talking about a problem or difficulty to someone who hasn’t experienced it. There may be compassion, but there’s no understanding.

Jesus understands, because he was there too.

Is Fear a Sin?

One of the biggest questions that arises when we consider whether or not Jesus was afraid is this: Is fear a sin? We know although he was tempted, he never sinned.

Some argue that because the command not to be afraid is repeated so often in the Bible, fear is a sin. While I can see how a person might think this, is the issue really this black and white? Would God give us an emotion and then, in turn, expect us never to experience it? Such an expectation seems irrational at best and at worst, cruel. Yes, he is God. He is holy and sovereign, and he can do whatever he wants without any need of approval from us, but he is also our Creator. He is the groom and we are his beloved. In Psalm 139 David declares, “How amazing are your thoughts concerning me” (Psalm 139:18).

God gave us this emotion because he knows it has something we would need. Like any emotion we experience, it must be kept in check so it doesn’t control us. But when it does what it’s supposed to, it warns us of danger. It heightens our senses and keeps us alert when we need to be. If we didn’t have the ability to fear, or decided never to acknowledge it, people would be jumping into cars with abductors and children would be talking to every sketchy stranger they met.

God’s Exhortation for Us

The command God gave to not be afraid carries with it this knowledge: we would be afraid. “Do not be afraid” is an exhortation. An encouragement. An invitation to fix our eyes on what we can’t see rather than the mountain in front of us.

In the situations where we see God saying this, his people were facing incredible odds. Israelites were fleeing for their lives, and although they’d been delivered in the past, they were a forgetful people. They saw themselves trapped between and army and a sea. They saw weapons and chariots closing the gap.

Our fear becomes sin when we follow it to go our way instead of God’s way. When we decide to let this emotion rule over us, and it becomes lord instead of the person who can cast it out with his love.

So what about Jesus? Did his fear cause him to sin? No, because he laid down his own deity, his own will, and his desires and submitted to the Father. He did not allow his emotions to control him, but instead completed the work he came to earth to do.

Coming to the One Who Knows

When I consider what Jesus went through in the garden and what he gave up to be with me, it makes me want to know him even more. It makes me want to come to him first instead of letting worry and fear keep me awake at night, running through worst-case-scenarios in my head.

What about you? Do you have a fear you can’t seem to let go of, and you’re not sure he’ll understand?

He does. His humanness was not lacking in any temptation, emotion or suffering. And because he knows, he can help you. He can take your hand, lift you up, and become your strength.

Let his knowledge of your struggle be your comfort today. You don’t have to be afraid, because he conquered fear for you. 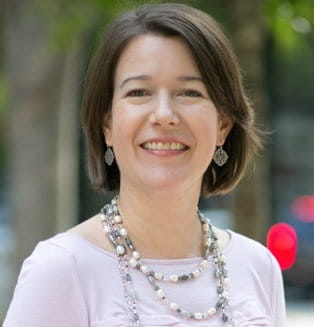 Abby McDonald is a blogger, speaker, wife and mom whose work has been featured on Proverbs 31 Ministries, (in)Courage, For Every Mom, and more. Her passion is to empower women to grow in faith and hope, even when life is messy. She earned a Bachelor’s Degree in English from the University of South Carolina, and loves to teach about writing at conferences each year. Abby lives with her husband and three children in western Maryland. You can connect with her at abbymcdonald.organd on Facebook.

10 Big Struggles Kids Face Today that You Never Worried About
10 Powerful Psalms to Regularly Read with Your Kids
How Can Christians Guard Against Imbalance between Faith and Politics?
10 Lies You’ve Been Told about Womanhood

8 Ways the Bible Teaches Us to Develop Patience