5 Lessons in Pursuing God from the Life of Jesus

A few years ago, after God had spent a decade lovingly pursuing and chasing me down, I reached a turning point in my life.

It was in the aftermath of this unexpected tidal wave that I realized I had a decision to make: I could keep running away from God, or I could turn and pursue a life of faith in Him.

The problem was, I didn’t know how to pursue Him.

Maybe you can relate.

In your heart, you know there has to be something more to life — someone worth counting on and trusting your life over to — but you don’t know where to turn.

During this faith crisis, I felt a pull to study the New Testament, and in this study, I found no greater person illustrates how to pursue connection with God than the story of Jesus praying in the Garden of Gethsemane before He was betrayed and arrested.

I can only imagine the size of the waves that were surrounding Jesus in this moment. When I read about the hours and days leading up to His death, I pictured the waves raging way above His head, threatening to pull Him under. He knew what was coming. He knew it wasn’t going to be pretty. But He didn’t run away or sink into despair. He reached out to God and, with great faith and courage, held on to hope.

After studying Jesus’ actions in the Garden of Gethsemane and as He was dying on the cross, I have identified five behaviors or choices that set Jesus’ pursuit of God apart from our often feeble and conditional efforts.

In our faith journey, we can follow Jesus’ example to keep ourselves from drifting away from God and keep our hearts hungry for more of Him.

Before Jesus was betrayed, denied, arrested, beaten, mocked, and condemned to death on a cross, He went to the Garden of Gethsemane. The accounts of what happened in the garden are recorded in three out of four of the Gospels in the New Testament—Matthew, Mark and Luke—and each account reveals another layer of the story.

Here’s what really messes me up. Because Jesus was both the Son of God and a man, He knew what was coming. He knew every prophecy His Father had foretold about Him—and that His job was to fulfill each one.

Jesus knew He was destined to die. In the Gospel of Mark, He predicts His death three times.

Let’s just stop right there for a moment. I don’t know about you, but if I knew I was destined to die, I’d probably stop working, buy a one-way ticket to the Caribbean, and give the rest of my money away. But Jesus didn’t cash it all in so He could spend His last days in comfort. Instead, He stayed true to His mission to set the captives free and conquer the grave (see Isaiah 61:1 and Isaiah 25:7-8). Part of staying true to the mission also meant staying intimately connected to the Father—the source of all strength—which is why we see Jesus praying and pursuing God on numerous accounts throughout the Gospels.

As followers of Jesus, we too have been given a mission. Our lives have divine purpose. While we don’t always know every detail of our mission, we can choose to seek God from beginning to end just as Jesus did. Jesus did not tiptoe into faith—into trusting His Father’s plans. He dove headfirst, joyfully, into deep faith. He was all in, all the time. The question is, are we?

In the garden and on the cross, Jesus could have rewritten the script and given Himself a happier ending. But He didn’t. Instead, He denied Himself and kept trusting in His Father’s plan.

Selfishness can be a huge barrier when it comes to pursuing relationship with God. When we are more concerned about our own profit or pleasure rather than God’s plans and purposes, our hearts and minds become compromised. That’s what makes the life of Jesus so inspiring, because He was the most unselfish person to ever walk the earth.

He didn’t obsess over having everything go His way. He lived God’s way. And we, too, can live God’s way when we lift up our eyes up to heaven and simply pray: Jesus, let me be free of me so that all I see is You. Thy will be done. Thy will be done.

3. Jesus craved to be in God’s presence.

From beginning to end, Jesus lived a life of courageous faith that was marked by a constant pursuit of God’s presence. What I love so much about this is that even though He and the Father were one (John 10:30), He still drew apart to connect with God in prayer—at all times! Even in His darkest hour in the garden He craved God’s presence. And on the cross He grieved the loss of God’s presence as He paid the ultimate price to erase the debt created by sin (Matthew 27:46).

In all three accounts of Jesus in the Garden of Gethsemane, we learn that Jesus is deeply distressed and troubled—in anguish. So much so that He tells Peter, James, and John, “My soul is overwhelmed with sorrow to the point of death” (Mark 14:34; see also Matthew 26:38). I’d be troubled too if I knew I was about to face betrayal, torture, and an agonizing death. The difference between Jesus and so many of us is He didn’t run away from God in His distress. Instead He fell with His face to the ground and prayed (Matthew 26:39)—so earnestly that his sweat was like drops of blood falling to the ground (Luke 22:44). If this was not enough, He didn’t pray just once but three times.

We have a saying in our house that we speak over ourselves when we feel exhausted. These words encapsulate God’s will for us when we feel like we are drowning: When the going gets tough, don’t give up; get on your knees.

In other words, when you want to give in to the waves, close your eyes and pray like Jesus prayed. Pray consistently. Pray arduously. Pray earnestly. Pray expectantly.

5. Jesus kept His eyes fixed on the Father.

I can only imagine the concentration Jesus must have had in order to keep putting one foot in front of the other after He was arrested. When the council of religious leaders condemned Him, when the Roman soldiers mocked Him, when He was led away to be crucified, when He was placed on the cross — Jesus could have looked to other things to numb the pain, but instead He kept His eyes firmly fixed on the Father and His perfect plan.

Where are your eyes fixed today, friend? Are they fixed on the tidal wave on the horizon or the waves rising above your head?

Reach for Jesus and keep your eyes fixed on the Father, and I promise He won’t let you drown. 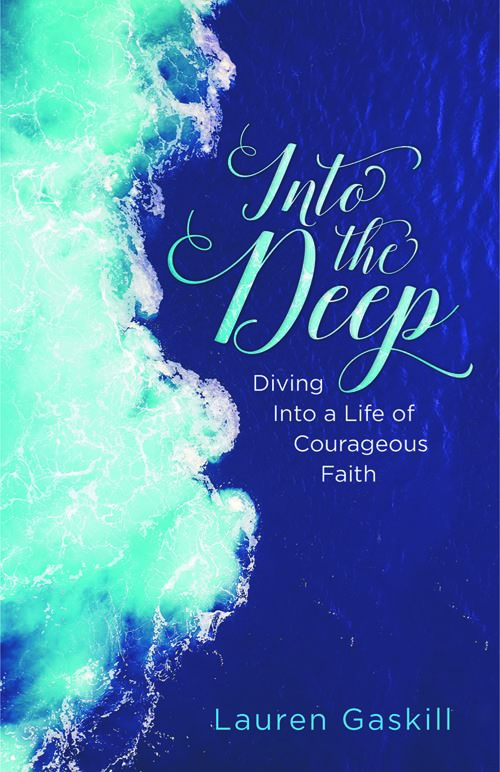 Lauren Gaskill is an author, speaker and host of the She Found Joy podcast and Finding Joy Ladies Night Out events. Gaskill is a storyteller who believes stories are powerful and loves how God uses them for His good. She writes and speaks to motivate and inspire others to experience abundant life in Christ. She is the author of Into the Deep: Diving Into a Life of Courageous Faith

NEXT: What if Following Jesus Takes You Where You Don't Want to Go?
Lindsey Dennis

How Do I Know I’m Saved if There Are So Many Doctrines and Denominations?
What Is the Curse of Ham, and Does It Impact Us Today?
Plus
But What If He Does: When God Challenges Your Faith
5 Celebrities Who Aren't Afraid of Being Christian
If Jesus Loves Me, Why Does He allow Bad Things to Happen?

Prayers for Healing to Pray for Sick Family and Friends
Plus
What Does it Mean to Experience God?
4 Proactive Ways to Hear from God
10 Powerful Psalms: Reminders of Hope for the Hard Times