One simple tip that will help you break bad habits
Tweet

One simple tip that will help you break bad habits

Wendy van Eyck is married to Xylon, who talks non-stop about cycling, and makes her laugh. She writes for anyone who has ever held a loved one’s hand through illness, ever believed in God despite hard circumstances or ever left on a spontaneous 2-week holiday through a foreign land with just a backpack. You can follow Wendy’s story and subscribe to receive her free ebook, “Life, life and more life” at ilovedevotionals.com. She would also love to connect with you on Facebook and Twitter. 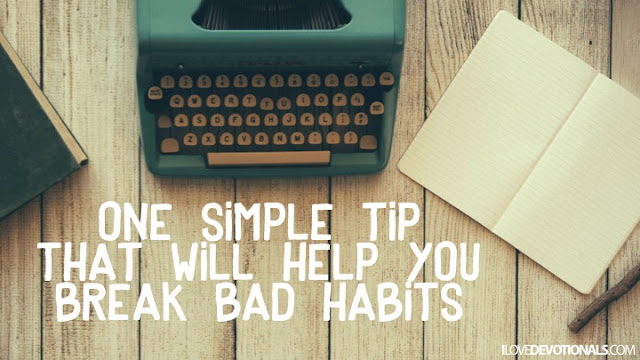 My husband and I work together from time-to-time. The other day we were driving home from a meeting when he very gently said, "I haven’t said anything but I find it very hard when I'm speaking, and then you break in and say something, it often takes a lot of courage to speak in these meetings."

I knew this conversation was going to come up because I'd been thinking I needed to try break this habit for a while. I told Xylon, "I'm sorry. I'm aware of it and I'm trying to stop."

Even as I said it in the car I wondered, ‘What do I mean by trying? What am I really doing to stop?’

Maybe I should have been more aware of God in that moment. Prodding me. Sticking his big God finger into my heart and poking around till I paid attention. But I was more concerned about making sure the conversation didn’t turn into an argument.

A few days later, Trevor Hudson sent me a message about my bio which I had recently changed to read, “Trying to love well, read well and run well…”

This time I was more awake to the fact that God wanted to do something in me.

Trevor's words were so kind and wise and gentle. He told me a story about himself and how his wife threatens put the words “He really tried” on his gravestone. And then he shared how he has given up on the word, “trying” - in its place he has put the word "learning."

I loved this simple tip. Replacing “trying” with “learning” made sense to me in so many ways. I changed my bio immediately. It now says, “Learning to love well, read well and run well.”

This simple change of exchanging “trying” for “learning” has extended much further than just my bio, it has also been helping me to break my bad habit of interrupting people. I know there are a bunch of people nodding their heads right now – and that bunch of people has all spent time with me – and I’ll say right up front, “I’m sorry. I valued facts over your heart. I am learning to do better.”

I used to tutor a teenager. She struggled academically and I can’t recall the number of times she’d tell me, "At least I tried!" What I do remember is how frustrated I got at that response. I wasn’t able to pinpoint why it irritated me at the time. But it did.

Since God’s been prodding me to learn instead of try I’ve been thinking about those tutoring sessions a lot, hoping to figure out what bugged me about that phrase. Then I stumbled on this story from John Ortberg’s book, The life you’ve always wanted. This is my paraphrase but you’ll get the idea:

Imagine you wake up tomorrow morning and decide to run a marathon. You vow to give it best shot and try as hard as you possibly can. Up until this point the only running you’ve done is to the store but you put on your running shoes, dress like a runner and begin your marathon. You try harder than anyone else there to finish it. No one has ever tried harder to finish a marathon than you. But it doesn’t matter you aren’t able to cross the finish line. Why? Because you haven’t trained for it.

Trying won’t turn you into a marathon runner.
However, if you learn from that experience and go home and learn about what it takes run a marathon. And you train for it and work toward it you’ll be able to run a marathon.

That’s the rub isn’t it?

You and I can be the best at "trying", but effort alone won’t change our bad habits or give us the lives we want.  << Tweet this

It would be awkward. Since I take correction like a toddler throwing temper tantrumI would probably feel raw and hurt when he told me what I needed to learn to do differently –– but I’d learn something. I would be able take action to change something the next time round.

Trevor ended his message to me saying, “Somehow replacing ‘learning’ with ‘trying’ feels lighter.” I’m discovering that is true for me. I pray it will be true for you too.

Welcome! If you're new here and don't want to miss a thing, be sure to subscribe to I Love Devotionals blog updates. Thanks for visiting!

Wendy van Eyck is married to Xylon, who talks non-stop about cycling, and makes her laugh. She writes for anyone who has ever held a loved one’s hand through illness, ever believed in God despite hard circumstances or ever left on a spontaneous 2-week holiday through a foreign land with just a backpack. You can follow Wendy’s story and subscribe to receive her free ebook, “Life, life and more life” at ilovedevotionals.com. She would also love to connect with you on Facebook and Twitter.