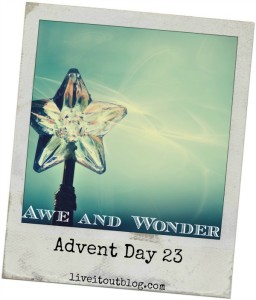 Several times through out our Awe and Wonder journey we have encountered Advent Scripture that stand familiar to our traditional readings we might typically participate in during this season. Several of the Advent Scriptures in the line up were, honestly, non-traditional and expanded our purview of the expected and stretched us to see God's Awe and Wonder. Don't you love it?

Today's reading is the former, quite familiar. Join me in a quiet space with a quiet heart and a posture of Awe and Wonder by simply reading the Scripture below with fresh eyes. All we will do today is read these 40 verses in the book of Luke, chapter 2. I will highlight in bold what Scripture speaks to my heart. Will you do the same? Will you soak in various verses below (maybe even flip your own Bible open and highlight them!). Fresh eyes. Fresh perspective. Looking past the familiar to see God's Awe and Wonder.

2 Around the time of Elizabeth’s amazing pregnancy and John’s birth, the emperor in Rome,Caesar Augustus, required everyone in the Roman Empire to participate in a massive census— 2 the first census since Quirinius had become governor of Syria. 3 Each person had to go to his or her ancestral city to be counted.

4-5 Mary’s fiancé Joseph, from Nazareth in Galilee, had to participate in the census in the same way everyone else did. Because he was a descendant of King David, his ancestral city was Bethlehem, David’s birthplace. Mary, who was now late in her pregnancy that the messenger Gabriel had predicted, 6 accompanied Joseph. While in Bethlehem, she went into labor 7 and gave birth to her firstborn son. She wrapped the baby in a blanket and laid Him in a feeding trough because the inn had no room for them.

8 Nearby, in the fields outside of Bethlehem, a group of shepherds were guarding their flocksfrom predators in the darkness of night. 9 Suddenly a messenger of the Lord stood in front of them, and the darkness was replaced by a glorious light—the shining light of God’s glory. They were terrified!

Messenger: 10 Don’t be afraid! Listen! I bring good news, news of great joy, news that will affect all people everywhere. 11 Today, in the city of David, a Liberator has been born for you! He is the promised Anointed One, the Supreme Authority! 12 You will know you have found Him when you see a baby, wrapped in a blanket, lying in a feeding trough.

13 At that moment, the first heavenly messenger was joined by thousands of other messengers—a vast heavenly choir. They praised God.

14 Heavenly Choir: To the highest heights of the universe, glory to God!
And on earth, peace among all people who bring pleasure to God!

15 As soon as the heavenly messengers disappeared into heaven, the shepherds were buzzing with conversation.

Shepherds: Let’s rush down to Bethlehem right now! Let’s see what’s happening! Let’s experience what the Lord has told us about!

16 So they ran into town, and eventually they found Mary and Joseph and the baby lying in the feeding trough. After they saw the baby, 17 they spread the story of what they had experienced and what had been said to them about this child. 18 Everyone who heard their story couldn’t stop thinking about its meaning. 19 Mary, too, pondered all of these events, treasuring each memory in her heart.

20 The shepherds returned to their flocks, praising God for all they had seen and heard, and they glorified God for the way the experience had unfolded just as the heavenly messenger had predicted.

21 Eight days after His birth, the baby was circumcised in keeping with Jewish religious requirements, and He was named Jesus, the name the messenger had given Him before His conception in Mary’s womb. 22 After Mary had observed the ceremonial days of postpartumpurification required by Mosaic law, she and Joseph brought Jesus to the temple in Jerusalem to present Him to the Lord. 23 They were fulfilling the Lord’s requirement that “every firstbornIsraelite male will be dedicated to the Eternal One as holy.”24 They also offered the sacrifice required by the law of the Lord, “two turtledoves or two young pigeons.”

25 While fulfilling these sacred obligations at the temple, they encountered a man in Jerusalem named Simeon. He was a just and pious man, anticipating the liberation of Israel from her troubles. He was a man in touch with the Holy Spirit. 26 The Holy Spirit had revealed to Simeon that he would not die before he had seen the Lord’s Anointed One. 27 The Spirit had led him to the temple that day, and there he saw the child Jesus in the arms of His parents, who were fulfilling their sacred obligations. 28 Simeon took Jesus into his arms and blessed God.

29 Simeon: Now, Lord and King, You can let me, Your humble servant, die in peace.
30     You promised me that I would see with my own eyes
what I’m seeing now: Your freedom,
31     Raised up in the presence of all peoples.
32     He is the light who reveals Your message to the other nations,
and He is the shining glory of Your covenant people, Israel.

33 His father and mother were stunned to hear Simeon say these things. 34 Simeon went on to bless them both, and to Mary in particular he gave predictions.

Simeon: Listen, this child will make many in Israel rise and fall. He will be a significant person whom many will oppose. 35 In the end, He will lay bare the secret thoughts of many hearts. And a sword will pierce even your own soul, Mary.

36 At that very moment, an elderly woman named Anna stepped forward. Anna was a prophetess, the daughter of Phanuel, of the tribe of Asher. She had been married for seven years before her husband died37 and a widow to her current age of 84 years. She was deeply devoted to the Lord, constantly in the temple, fasting and praying. 38 When she approached Mary, Joseph, and Jesus, she began speaking out thanks to God, and she continued spreading the word about Jesus to all those who shared her hope for the rescue of Jerusalem.

39 After fulfilling their sacred duties according to the law of the Lord, Mary and Joseph returned with Jesus to their own city of Nazareth in the province of Galilee. 40 There Jesus grew up, maturing in physical strength and increasing in wisdom, and the grace of God rested on Him. ( Luke 2:1-40 emphasis mine)

Sit and read, even re-read this Scripture. Soak in it. Let it permeate your heart. Let it drive your worship of the coming King--the King who came, who LIVED, who died and who rose again in VICTORY.