Something May Have to Break for you to Become Unstuck
Tweet

Something May Have to Break for you to Become Unstuck 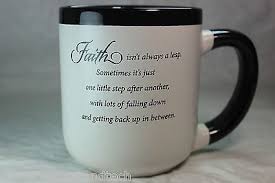 As I stood washing dishes, staring out the window, enjoying the beauty and stillness of the morning, I inadvertently placed a glass inside a mug. When I went to rinse this glass out, I realized it was stuck inside the mug. Stuck. It wouldn't budge. I tried shifting it. Nothing. Stuck. Immovable. I couldn't believe how the glass got stuck in this mug so quickly. Just like that, it was stuck. I asked my daughter to release it. Nothing. It was stuck. I asked my husband "the genius" to take a stab at it. He tried soap, heat, water. It remained stuck.

This mug and glass sat in the sink for three days as each person tried different ingenious methods that should work. Stuck. Just like that. Stuck.

Sometimes our lives become stuck. We're going through life - we have a degree of wisdom and knowledge, we have good friends and a great support system, we're secure in our relationship with the Lord, we're doing all of the right things but just like that, we think we're past the time where we get stuck, but just like that we become stuck. Sometimes we don't even see it coming and even if we do, there's not much we can do to prevent it. Because life is like that - we don't have all the answers but we're making progress. Literally, anything has the potential to make us become stuck - a good friend may have said something that triggered a memory; your child did something totally unexpected; you fell off the curb and injured yourself. We all have the potential to become stuck.

The glass got stuck in my favorite mug which has an inscription about faith - what it is and what it's not about taking the next step and pressing on. How ironic. The glass wasn't a bad glass but in its constrained state neither the glass or mug could fulfill their purpose. Something had to give. 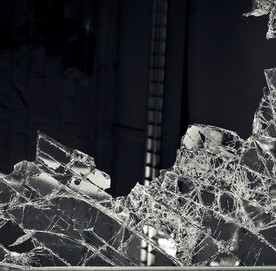 On the third day, I decided that this situation had to be remedied and that I was not going to lose my favorite mug in the process. I had to separate what I needed from what I determined was going to be disposed of and in this case, the glass that created this situation could be disposed of as it had little value to me. Well, I valued the glass less than the mug. So I gently tapped the whole concoction against the sink. One time. Still Stuck. Twice. Still Stuck. A third time just a bit harder and this time the glass shattered into tiny pieces.

My faith mug was restored and the glass was shattered. The thing that caused the unyielding and unwavering state had to be broken and shattered so that the mug could be restored.

Relief. The broken shards of glass were removed so as to cause no further damage. Unstuck. Freedom. Purpose. Growth

In becoming unstuck God breaks the thing that's holding us back. He may tap us once and give us hints but we don't see what He's trying to do; we don't initially corporate with His plan but only the Right Person can make us unstuck.  It may take some time but you have to desire to be unstuck so that you can be used for the purpose you are designed for. Determine that it's worth it for you to become unstuck.

Turn my eyes from worthless things, and give me life through your word. Psalms 119:37

For I am about to do something new. See, I have already begun! Do you not see it? Isaiah 43:19

Have you determined that you want to be unstuck?