The Gospel According to Little Boys 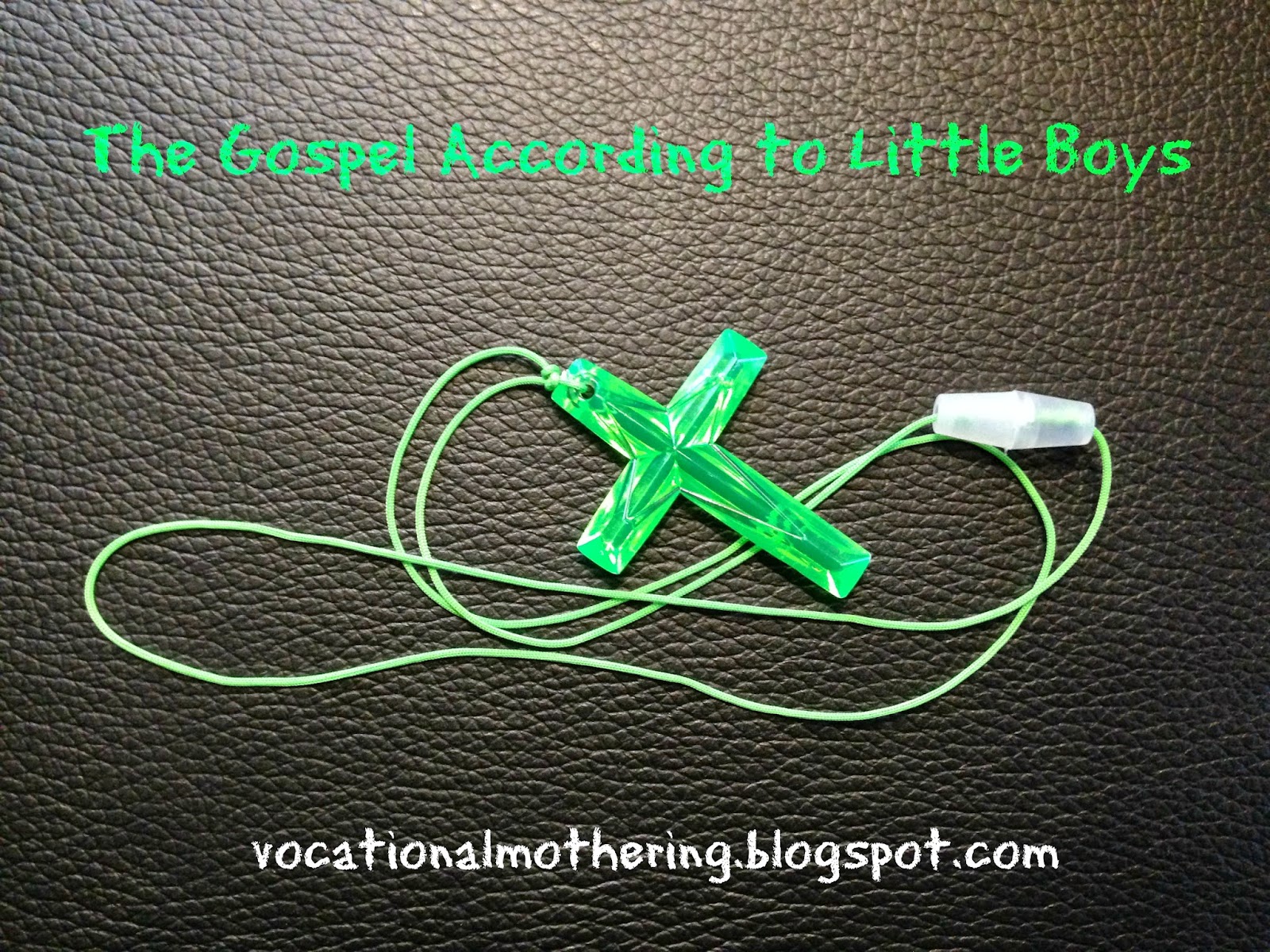 In honor of Easter, my two-year-old was decked out in paraphernalia when I picked him up from preschool.  He wore a special cross hat that he had proudly colored.  (His teachers had made it skillfully out of a paper plate - Seriously, how do preschool teachers repurpose all they do into such niffy concoctions?)  In addition, he was carrying an Easter basket full of candy, holiday poems, and that grass you never can stop picking up all over the house.  Finally, he had a new plastic cross necklace around his neck.  That was his favorite.

And when we went to the playground, I found out why.

There was my little two-year-old, running around the playground interacting with children twice his age.  He loves playing with his brother's friends.  That was not unusual.  But what happened next was:  He picked up his cross necklace, pointed it at one of the boys, and made a shooting sound.  Yes, he was using his cross as a gun.

I went over to him for an explanation.  He said, "Mommy, do you know my cross has power?"

"Oh really, what kind of power?" I asked.

"Fire power!" he exclaimed as he happily ran off.  He left a trail of laughs from boys behind him as they joined in the fun.

If you're a mother of boys, you might be letting out a knowing sigh right now.  I've come to expect my boys' rough and tumble nature to come out in surprising moments.  And sometimes, I've learned to just roll with it.

But in this instance, we certainly talked about how the cross is not a weapon, and we don't play by pointing guns at people.  I realize this whole lesson falls apart the next time I put a water gun in his hands, however.  Sigh.

What's interesting about the incident, though, is that my son's statement was correct.  The cross really does have "fire" power.  Scripture describes the Holy Spirit as fire, and the Spirit witnesses to each of us about the power of Christ's sacrifice on the cross.

I sometimes wonder if we tame Easter too much.  It's become a holiday of egg hunts, a fluffy bunny who likes to pose for pictures, and ruffled dresses.  Maybe we say a sentimental prayer about the importance of family before we feast.  Maybe it's the one Sunday a year we go to church...Maybe we are missing something.

Jesus' crucifixion was gory and messy, and his resurrection on Easter Sunday was far from a casual event - it was a cataclysmic one.  It changed everything.  The evil forces of this world were defeated, and we are grafted into that victory through faith.  There is definite warfare imagery going on.  Therefore, in the spirit of my son's playtime:

I love how my son naturally related the cross' power to terms young boys could understand. That's exactly what Jesus did in the parables:  He took big truths and distilled them down into little nuggets through the use of images that were second nature to his audience.  The parables retain their power by still being applicable outside of their original audience, however, just like my son's example is to us.

So if you're looking for Easter to mean a little more this year, check out a two-year-old boy on the playground.  Maybe he'll be grinning ear to ear and darting to and fro while his cross necklace dances across his chest.  He's pretty adorable, and he's taught me something too.

If you enjoyed this post, I invite you to read A Theological Lesson From...M&M's!, my Easter post from last year.