A New Song International: Together, we can make a difference!
Tweet

A New Song International: Together, we can make a difference! 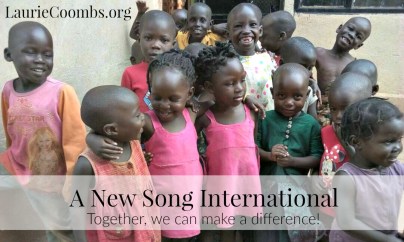 Some of you have been with me for a long time and others are just tuning in, but regardless of where you fall in that spectrum, I’d like to invite you all to join me in the work God has recently called my family and me into. But before I do that, I’d like to give some context.

As I’ve mentioned before, we brought our little girl home from Uganda in April 2016 after a five and a half year long wait. Baby girl’s name is Joy, and she lives up to every bit of her name. She has not only brought joy to our family, but quite honestly, she spreads her little light to just about everyone who sees her.

Prior to coming home, Joy was loved and cared for by the people at Happy Times Childcare Initiative, an incredible institution run by Ugandans who have a heart to help not only orphans but those in need within their community as well.

We spent a lot of time at Happy Times while in Uganda. We came to know the people there. To see their mission and vision and the love they continually provide to every child who comes into their care.

David Platt once wrote, “We learned that orphans are easier to ignore before you know their names. They are easier to ignore before you see their faces. It is easier to pretend they’re not real before you hold them in your arms. But once you do, everything changes” (David Platt, Radical). I cannot even begin to explain how true this statement is. We have held and played with and loved on the beautiful children of Happy Times, and they have stolen our hearts. Their names and stories will never be forgotten.

There’s Ndaula (pronounced Nawla), a three year old little boy who stole my heart with his great big smile. A boy who grabbed my hand the moment I stepped out of the car at Happy Times and rarely left my side. A boy whose mother died of HIV when he was one and a half and his brother was three, and whose father left the boys at a neighbor’s house and just disappeared.

There’s Trevour, a fourteen year old boy who just might be the most humble, hard-working boy I’ve ever met. A boy who was born to a teen mother and is “not welcome” in his step-father’s home simply because he was born prior to his mother’s marriage.

There’s Florence, a two year old little girl who my daughters and I nicknamed “banana girl” after we saw her sitting on the curb outside the babies home munching on a banana. A beautiful little one with scars all over her body who was tortured from the time she was only a few months old by her mother and father. A girl who was found in a pool of her own blood after her parents tried to kill her and successfully murdered her brother.

There’s Jane, the fifteen year old girl who chose to care for our little Joy as her own until we came for her. A girl who took the role of mother at the age of ten to her six sisters when their mother died suddenly. A girl who used to spend her days digging for enough food to fill seven empty bellies while her father drank alcohol and tried to sexually abuse her at night. A girl who bravely fought for she and her sisters by approaching the authorities to escape their father.

There are children with HIV like Ruth and Nassanga, both five years old, who lost their mother to HIV a couple years ago and lost their father this month to the same disease after having been bedridden for some time. Girls who were rejected by other family members who fear the girls will transmit HIV to them. Girls who lived on the streets, alone with no one to care for them, before they were brought to Happy Times.

And then there are all the babies––Abigail, Lylah, Reno, and others––who have joined the Happy Times family this past year after being abandoned. One was found naked in a swamp. One in a drainage ditch filled with human sewage. Another left on the side of the road.

There are so many stories. These are just a few of the children of Happy Times, and there are more to come. Happy Times has become a safe haven for children in need within the Luwero district.

Beauty and tragedy intertwine somehow in Uganda. Despite countless heart-wrenching stories, Uganda is a beautiful place with beautiful hardworking people. People who know things we don’t. People who never ask for a handout, who have no sense of entitlement. People who have faith like I’ve never seen before. People who don’t always know when or where their next meal will come from, and yet I’ve had these people look me in the eye and say with sincere faith, “God is good. He always provides.”

And He does. Continually.

Quite honestly, we have fallen in love with this country, and its people. It has changed my family and me forever. We will never be the same. It wrecked us in ways we cannot put words to. But this is truly a good thing. We’re broken for the very things that break God’s heart.

In fall of 2016, just about six months after we arrived home with Joy, I awoke to a message from Happy Times. They sent a picture of a one year old little boy named Joshua, a little boy the same age as our baby Joy, who had died that morning of malaria. They said they tried all night to find a doctor for little Joshua but found none. In the morning, they gave Joshua a bath and fixed a bottle for him, but Joshua took his last breath as his caretaker returned with the bottle. Joshua was buried that day in a local dump, the only plot of land available. And this was the last straw for me. It was simply too much. This could have been our Joy. This was a preventable death. And I knew in that moment that it was time to do something.

Happy Times asked us to partner with them shortly after Joshua died, and after prayerful consideration, we said yes. This was clearly God’s leading. A couple of our closest friends have joined our mission, and A New Song International was born.

The needs of Happy Times are many. And if there’s one thing we know, it’s that we can’t do this alone. We need others to catch our vision and join our mission. People who would like to make a real difference in the life of a child. People who would like to share the love of Jesus with “the least of these.” People who want to combat poverty and help provide sustainable solutions to the problems Ugandans continually face.

We need people to join our team. People willing to use their gifts and talents to further our mission. People  willing to spread the word about what we do. People who are willing to give financially–businesses or individuals who would like to partner with us by giving a one time or a reoccurring donation or by sponsoring a child.

Let’s see what Jesus can do in and through us as we serve the children of Uganda. Together, we can make a difference!

“Religion that is pure and undefiled before God the Father is this: to visit orphans and widows in their affliction, and to keep oneself unstained from the world.” – James 1:27

I’d love to hear your thoughts! Share in the comments.