When You Can't Let Go of Your Children

The day my son left for college, I thought my heart had just been ripped from my chest. And I don’t say that because it sounds dramatic and makes for a great read. I mean, it seemed like my world would never be the same. I had been planning for this day for months, well…years. I knew it would come, but when it did, it was much harder than I had even imagined. It all began the first day of his senior year of high school. He drove his sisters to school, as he had for several years prior, and when they left the driveway, the tears streamed down my face. I knew it was the beginning of the end. Then, there was Senior Night for his football team and later his basketball team, and more tears flowed. With every passing event over the next few months, the looming anxiety of his certain departure from my home became ever more present.

The weekend before he left for college, we took him shopping for dorm room gear – bed sheets, towels, toiletries, and the like. I fought back tears the entire time. (By this time, the entire family was sick of my tears). The night before he left, the family flocked into his room and helped him sort everything he owned into piles. We packed suitcases and duffle bags. We laughed about old times and told stories about when he got caught sneaking around. And after everyone had gone to bed, I knocked on my son’s door and asked if I could come into his room and just sit. We didn’t say much, just idle chit-chat, but I needed to just be there with him.

The next morning we loaded two cars to head to college. Before we left, my husband asked our son if we could talk. We took him into the living room and sat down. My husband began to read a four-page letter of how much our son meant to us, how honored we were to be his parents, the significance of his role in the Kingdom of God, and our hopes for his future. Though they tried to fight them, tears welled up in both my son’s and husband’s eyes.  We made the short drive to his campus, unloaded his things, and within an hour, drove away without him. On the way home, we stopped for lunch with our daughters, and when I ordered, the tears came and came and came. The tears didn’t stop coming for weeks, and then months. 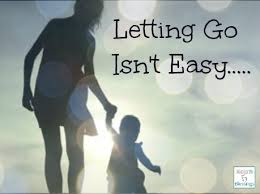 Nothing is natural about letting go of the hand of the little boy that you birthed, reared, rocked, spanked, and encouraged for the last eighteen years. Nothing. It seemed I had been teaching him for the last many years to learn to be independent and let go of my hand, only to realize that the one who would struggle with the release would be me, not him. Letting go of our children as they age into adulthood is one of the hardest things we will ever do as moms. We feel comfortable kissing boo-boos and cleaning up spilled milk. There’s not much comfortable about letting them go it alone, but it is necessary. For you see, it is the natural order of things. It is God’s intention for our adult children to move on, leave the nest, learn, grow, become strong men and women of God, and be productive with their lives. Don’t hinder their life’s fulfillment by being the parent that cannot let go.

This journey of letting go has led to me learn a few facts along the way, and I thought I’d share them with you:

I will not tell you that I don’t eagerly wait by the phone if I think my children are going to call or explode with excitement when they are coming home, but the fear of letting them go no longer disables me.

Jennifer Maggio is an award-winning author and speaker, whose personal journey through homelessness, abuse, and multiple teen pregnancies is leaving audiences around the globe riveted. At 19, Maggio was pregnant for the fourth time, living in government housing on food stamps and welfare. She shares with great openness her pain, mistakes, and journey to find hope in Christ. She ultimately became an 11-time Circle of Excellence winner in Corporate America. While a vocal advocate for abstinence, and sustaining today’s marriages,  Maggio recognizes that single parenthood exists and is passionate about seeing these parents thrive. She left her corporate successes behind to launch a global initiative to see single moms living a life of total freedom from financial failures, parenting woes, and emotional issues.  Her passion is contagious and her story has been used to inspire thousands around the globe. Today, Jennifer works to ensure that no single mom walks alone as the founder of the national profit, The Life of a Single Mom. For more information and resources, visit the website HERE.