But God told Samuel, “Looks aren’t everything. Don’t be impressed with his looks and stature. I’ve already eliminated him. God judges persons differently than humans do. Men and women look at the face; God looks into the heart. 1 Samuel 16:7 (MSG)

I grew up in a country where apartheid wasn’t just a word it was a policy.

I grew up in a country where at 9 years my best friend had skin darker than mine. And we spent our Monday afternoons with a dozen or so kids who spoke a mother tongue that grew out of African soil.

In 1994, when I was 11, South Africa had its first democratic elections and became the “rainbow nation”: a group of people with every skin shade and a dozen or so languages embracing each other.

And he was handsome, kind and full of grace for the people who struggled to see bones covered in white skin and black skin holding hands.

Xylon invited me to join him in pursuing a life that would not be ordinary. A life where I would learn to look past the colour of a persons skin to the colour of their heart.

Recently, I gave Xylon the book of the “Colour of Water” to read and told him how in the book a little boy asks his mother, “What colour is God?” And his mother replies, "He doesn't have a colour… God is the colour of water."

I thought about what Xylon said, and about 1 Samuel 16:7, about how our hearts are all the same colour under our diverse skin tones. 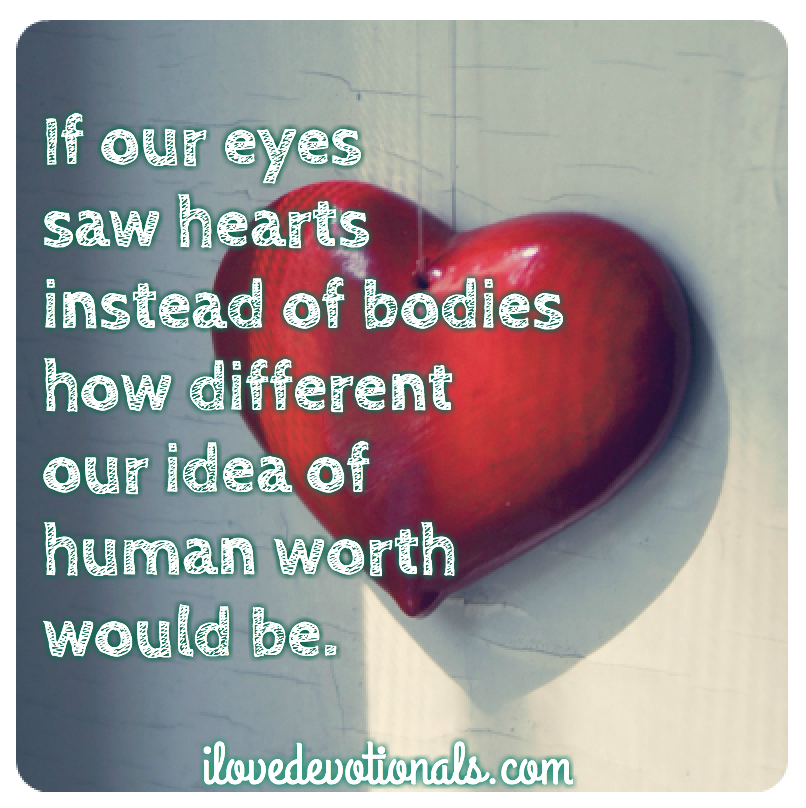 And how, if our eyes saw hearts instead of bodies how different our idea of human worth would be. (tweet this)

Relationships don’t happen by accident, they happen by choice. And if I'm honest right now, my friends all look a lot more like me then they look like my husband. And if it wasn’t for him my world would be pretty vanilla.

I’m praying that God will open my eyes to see hearts. I’m listening when people who are different to me speak. And I’ve decided that to be intentional about pursuing friendships with people who are nothing like me.

And I’m allowing the words of tobyMac to challenge me and change me: My world is diverse, because I wanted it to be, because God placed that in me. If we’re ever going to be the shining city on the hill, we have to be a “diverse city.” I think we’re more beautiful diverse than we are separated and divided.

Ponder: How diverse are your friends and family? What stops you from #GoingThere?

Pray: Lord, give me your eyes to see hearts instead of skin. Give me your ears to listen first and speak second. Help me to be a good friend to people who look nothing like me.

I have friends online who are #GoingThere. Deidra Riggs is a woman you should get to know online, and she’s been #GoingThere for a good long while now. But she’s getting tired. So others are coming alongside her and throwing wide their fears and slips of the heart and extending the conversation. Others like Lisa-Jo, and Jennifer, and Alia, and Kate. And they’re inviting you to go there, too.

Get a copy of my e-book Life, Life and More Life for free. Just subscribe to receive my devotionals every Monday and Friday. In the book I share some of thoughts on how to make every moment count, gleaned from my experiences of loving my husband through 18 sessions of chemotherapy and a bone marrow transplant. You can subscribe here

- This was orginally published on my site in September 2014 to read more devotionals like this go to ilovedevotionals.com