Are You Dying To Find Life?

We know that when Jesus was raised from the dead it was a signal of the end of death-as-the-end. Never again will death have the last word. Romans 6:9-10 (MSG) 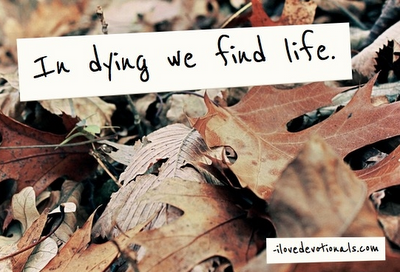 In a strange way my husband is dying to live.

Once a fortnight for the last six months, my husband and I have pulled on courage like an old sweater and walked into the oncology unit. Once there, he’s received 6 bags of life-giving poison.

The chemotherapy is meant to kill the cancer cells. Sometimes it kills his good cells too though, which makes his hair fall out and causes painful mouth ulcers.

The chemotherapy is killing him. And at the same time giving him life.

We put up with small death at cellular level because without it he might not have the opportunity to live a big life.

Chemotherapy has been opening my eyes to the fact that death doesn’t have to be the end.

It is helping me realize that dying can lead to life, life and more life.

It doesn’t change the fact though that sometimes the cost of these small deaths seems too much to bear.

At times like that we have to remind ourselves that these small deaths have to happen so that he’ll be around for his 30th birthday (and hopefully his 40th, 60th and 80th).

We have to remember these small deaths are just part of a bigger story that we’re living, one in which life is beautiful as well as fragile, and how we live is more important then how we die; a life in which sometimes the only thing we have to hold onto is that the bible promises that death is not the end.

We need have no fear of death because in dying we find life. (<-- tweet this)

Do you believe that death is not the end? How would you live differently if you thought that in death you found life?

Share this devotional easily with your friends by clicking here to tweet it. You can also connect with me on Facebook and Twitter.
This devotional orginally appeared in August 2012, on my blog, I Love Devotionals