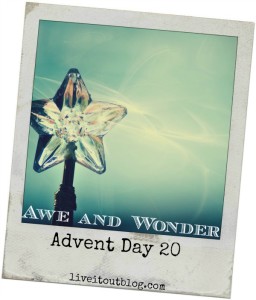 Today I want to bring in my sweet friend Brett Wilson for Awe and Wonder. Though she is just a bit younger than me (wink wink), I want to be like Brett when I grow up. I love her writing and her unique perspective and I know you will to. Today's Scripture brings us into some of my most favorites for Advent as we read about Mary's role in the Nativity.

Six months later in Nazareth, a city in the rural province of Galilee, the heavenly messenger Gabriel made another appearance. This time the messenger was sent by God27 to meet with a virgin named Mary, who was engaged to a man named Joseph, a descendant of King David himself. 28 The messenger entered her home.

Messenger: Greetings! You are favored, and the Lord is with you! [Among all women on the earth, you have been blessed.]

29 The heavenly messenger’s words baffled Mary, and she wondered what type of greeting this was.

Messenger: 30 Mary, don’t be afraid. You have found favor with God. 31 Listen, you are going to become pregnant. You will have a son, and you must name Him “Savior,” or Jesus.32 Jesus will become the greatest among men. He will be known as the Son of the Highest God. God will give Him the throne of His ancestor David, 33 and He will reign over the covenant family of Jacob forever. Mary: 34 But I have never been with a man. How can this be possible? Messenger: 35 The Holy Spirit will come upon you. The Most High will overshadow you. That’s why this holy child will be known, as not just your son, but also as the Son of God. 36 It sounds impossible, but listen—you know your relative Elizabeth has been unable to bear children and is now far too old to be a mother. Yet she has become pregnant, as God willed it. Yes, in three months, she will have a son. 37 So the impossible is possible with God. Mary (deciding in her heart): 38 Here I am, the Lord’s humble servant. As you have said, let it be done to me.

Mary, did you have a five-year plan?

Did you know that a baby boy would one day eclipse your future? Did your dreams dwell on the expected–an engagement, a wedding, a husband, a house, a child (all in that order)?

Did they fall into line with what all of your other friends were in the midst of obtaining?

Mary, were you stressed about the Biblical equivalent of mortgages and student loans? Did you worry that you weren’t marrying the right man? Were you challenged with determining your calling?

Did you secretly fear that your gifts and talents would never amount to anything? Did you know that a multitude of people would learn from your obedience?

Mary, many of us today can appreciate the position you must have been in all of those years ago. We share similar doubts and hesitations.

We wish that we could be visited by an angel, so that our futures would suddenly “come upon a midnight clear.” We pray that a new season, a new birth or a new role would be upon us.

We want to play an important role in the story, too.

But, many of us are fearful of what it would mean to live in a way that would abolish what we’ve set out to do. Too fearful.

What’s more is that we’re stubborn. And it’s hard for us to let go of the life we have decided for ourselves. Because a lot of us have a five-year plan, too.

We plan everything, Mary. We have a timeline. We have expectations. We plan our schooling, our careers, our marriages.

Some of us even plan when we’ll have children.

If an angel visited us tonight and exposed God’s plan, it would ruffle some serious feathers. Of course we want to serve the Lord. But we want to do it on our own terms.

It seems that the God that you served is constant. He often calls us, in this day and age, to the unexpected. Or even, like in your case, the miraculous.

The only question you had about the whole process–becoming the mother of the son of God and naming him “Immanuel”–involved the biology of the matter. Your gentle curiosity is understandable. Even humorous.

But, we have something to look up to about your reaction to this monkey-wrench, this unexpected plan that unfolded in your life.

You let go of your plans, and you relinquished yourself to the Lord. His spirit dwelled within you, and you have birth to His incarnation.

You let “the most high will overshadow you” (35). And perhaps, there is the key to living life in awe. Of having the humility to let God overwhelm your plans, your life.

Mary, you served the same Lord that we do. You worshipped our same Maker.

You serve the same Great I Am. The one who asks us to let our callings, our lives, to be “overshadowed” by Him.

Mary, we have so much to learn from you.

Through out our Advent journey together we've talked about our role in the story--the good news. It is all to easy to allow ourselves to get caught up in pondering and sometimes obsessing over our calling...what we will do with our life. But, during this Advent, let's allow Jesus and HIS story...His Ultimate calling...to overshadow us. Let's ponder and obsess about His fame and glory.

What perspective might you find if you focused on God's glory more through out the day than your own calling and purpose in life? 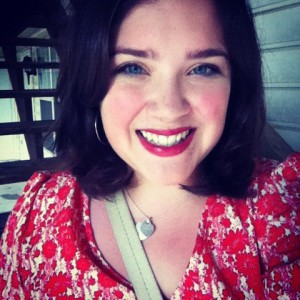