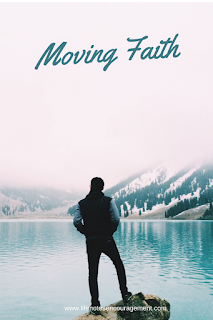 There was once a man who had great authority - a Roman Centurion, whose servant was ill. It would appear that he was so ill, conventional medicine at the time was having no effect on his healing. This great leader had a chance meeting with another Great Leader - Jesus.

In his encounter with Jesus, he asked Jesus to speak the word, so that his servant could be healed. His servant wasn't with him but this great leader knew that the other Great Leader was a healer by miracles; His reputation had preceded him.

When Jesus heard the great leader's request, he was so amazed that He exclaimed: "I tell you the truth, I haven’t seen faith like this in all Israel!"

After speaking further on this man's faith, Jesus uttered these profound words: “Go back home. Because you believed, it has happened.” And in that same moment, his servant was restored to health.

The centurion's faith and action were based simply on the fact that Jesus had performed many miracles including healing the sick; nothing else. The Centurion was an outsider, a Gentile, but one of means. He was also familiar with the customs and social rules of the day. The Centurion to a degree understood human authority and how that translated into getting things done; so to a degree, he had a human understanding of faith. He understood that they had to be allegiance and obedience. "I am a man of authority; if I say do this, I know it will be done." And this was the logic he employed as he made his request to the Great Leader.

Sometimes, I am moved by the faith of others especially as they speak. I may call to check in on them, knowing that they are not in the best of circumstances and it's as if during the course of conversation they choose to rise above their circumstances and choose to place their faith in the Great Leader. They may say things like, "the joy of the Lord is my strength" or "God is faithful." Or I may be speaking to a person who I perceive has little need for great faith simply because of their circumstances and they will mention that God is the central source in their lives, and humanly speaking sometimes I find myself amazed at their expressions of faith. Because it's not just their words. It is their sincerity and belief that amazes me yet makes me want to be more faithful regardless or despite my own circumstances.

Jesus was moved by the centurion's faith. The centurion showed his great faith partly by believing that Jesus could heal by a word, but mainly in his comprehension of who Jesus was as compared with himself. The less faith we have, the less we esteem Jesus, but the more faith we have, the less we esteem ourselves. Great faith requires humility. We are sometimes moved by each other's faith because we see their humility regardless of their position. May our limited understanding of faith move us to exhibit a faith that amazes so that we are assured by the Great Leader that because we have believed, it has happened.

Then Jesus said to the Roman officer, “Go back home. Because you believed, it has happened.” And the young servant was healed that same hour. Matthew 8:5-13

Can Jesus marvel at your faith?