Why It's Important to Run for the Hills
Tweet

Why It's Important to Run for the Hills

Last weekend I ran, well really drove, to the hills.  I attended my church's women's retreat in the Pocono Mountains.

Moms, when is the last time you packed your bags and left your family for a couple of nights?

Maybe you practice the discipline of it, and take an occasional weekend away to recharge or connect with girlfriends.  But if you're like me, you've done it next to never since you've had children.

In order to get away, I had to push through some doubts.  First, would a weekend away really be worth all of the hassle?  I was cleaning, packing, stocking the house, and arranging the necessary logistics.  I was exhausted - and hadn't even left yet.

Second, would my husband be okay watching our young children all weekend and then going back to work on Monday?  Would he be able to shoulder the extra work in addition to the various additional responsibilities that had cropped up?  We all have a family rhythm, and my time away was a break from ours.

After going on the retreat, I can confidently answer that everything worked out okay - actually, better than okay.  My husband had a blast with our children.  And I returned refreshed, renewed and transformed.

If you have been feeling reluctant - over even guilty - about needing some time away, I wonder if you've wrestled with any of these thoughts:

My husband just doesn't understand nor appreciate what I do all day!  Have you given him the chance to do it by himself?

My children won't stop whining - even an occasional thank you would be nice!  Have you given your children the opportunity to miss you?

I am so exhausted.  One day bleeds into another - it's like I am reliving Groundhog's Day!  When is the last time you allowed yourself a break?

We can't allow maternal pride to rob us of a break.  Yes, other people will do things differently than we do in our absence.  But I've learned over the years that just because they do it differently doesn't mean we always do it better.  God created each of us with strengths and weakness; the strongest model for family life is one that accepts an influx of guidance and support.

Christ established a model for us to emulate by heading for the hills.  Mark 6:45-46 states, "Immediately Jesus made his disciples get into the boat and go on ahead of him to Bethsaida, while he dismissed the crowd.  After leaving them, he went up on a mountainside to pray."  Yes, Christ was praying to the Father, but he was also intentionally removing himself from those he was beholden to in order to refuel.

If you've been sensing the need for a little time away, have you ever considered that it is Jesus himself who is bidding you to go? 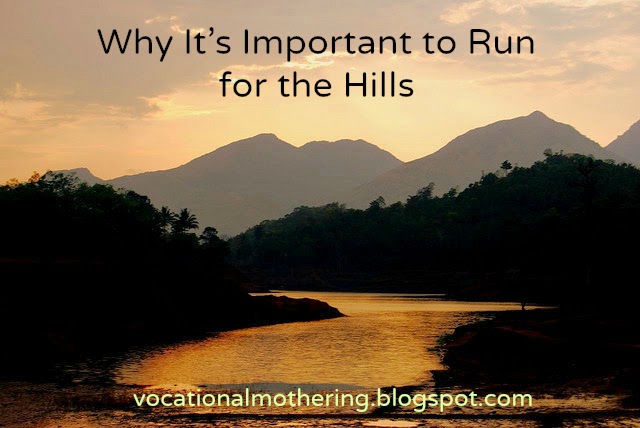 unlocking the diary of your heart: using your prose to write your poetry
Jennifer Camp