6 Reasons Aladdin on Broadway is Unmissable 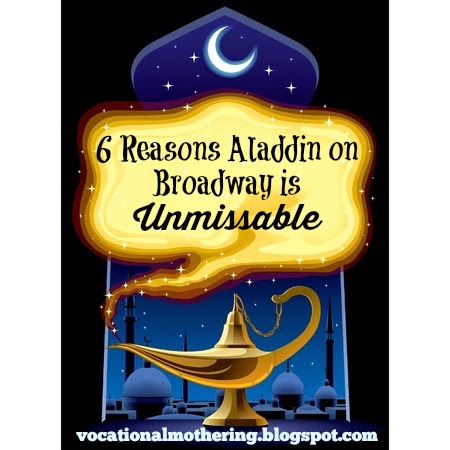 We tried two times and failed.  The third time, we actually got tickets!  My husband and I took our two young boys to see a matinee show of Disney's Aladdin.  It's a hot ticket, and now we understand why.  To say we enjoyed ourselves is an understatement.  (My littlest keeps taking about how much he liked "that blue guy," a.k.a. the Genie.)  So I decided to write about the 6 reasons I'd recommend seeing the show:

1.  The show is kid-friendly.  Despite the fact that it is on the longer side at two and a half hours (and I went with a three-year-old, so I know), it is engaging - even mesmerizing at times - and clean family fun.

2.  You will see the REAL Jafar (Jonathan Freeman).  You've already heard his voice if you've seen the movie, and now you get to see him in person playing the role.  Remember when he responds dryly about the princess' choice in suitors?  His line of being "ecstatic" is even better on stage.

3.  The Genie on Broadway (James Monroe Iglehart) will go down in history as one of the greats.  Sure it's tough to imagine besting Robin Williams, but it's a pleasure to see some of Williams' famous lines performed while allowing someone else to lend their own genius and unique spin to the role.  Trust me, that's done.  There was even a spoof on ABC's Dancing with the Stars, but that's all I'm gonna say...

5.   Aladdin (Adam Jacobs) delivers his role to perfection.  He's everything you'd expect from a leading man.  You root for him.  He makes you laugh.  He might even make you cry - like when he sings his heart-felt appeals about turning his life around and pleasing his mother in heaven.  His voice is not only memorable, but it's laced with charismatic transparency.

6.  The show is a visual feast for the eyes.  My favorite extravaganza is Aladdin's parade to the castle after the Genie makes him a prince.  There are costumes with long yellow feathers that are especially breathtaking.  But rest assured there are enough sequins, sparkles, colors and lighting effects to satisfy anyone's need to be wowed.  And Princess Jasmine (Courtney Reed) is the most beautiful leading lady I've seen on stage.

I've been blessed to live in the New York metro area for over ten years and have seen well over a dozen Broadway shows.  This one is near the top!  It's nice to find kid-friendly entertainment that packs such appeal.

Let me know what you think by leaving a comment if you've seen it too!  And just in case you're wondering, please note that this review is unsolicited and is not tied with any monetary endorsement.  But you can tell the powers that be that I'd always accept free tickets for a blog giveaway LOL!

I thought I'd start the school year with something fun!  Be sure to check my blog next week for a link to my guest post on (in)courage.