Surrounded & Swept Up By The Lov(ing) of God
Tweet

Surrounded & Swept Up By The Lov(ing) of God

Marie Osborne is a wife, mom, coffee drinker, loud laugher, & Jesus follower. When she isn't laughing with her husband, texting with her girlfriends, singing with her preschooler, or chasing after her toddler twins, she's probably writing at her blog while binge watching Netflix.

I've had a song stuck in my head for a couple days now.

That's not uncommon for me. I'll sing a complete song, repeatedly, all the way through, for several days. Usually a couple times a day, I'll sing it at the top of my lungs. Especially if the song has a great crescendo that warrants a big finish. Like a good Adele tune or something from a Broadway musical.

The stuck-song is normally something catchy and slightly inappropriate. Not that I can claim to have edgy musical tastes. You're more likely to hear James Taylor & Sara Groves bumpin' at my house than...pretty much anything else. But on occasion, it just makes me giggle that a suburban stay-at-home mom is belting out Cee-Lo in her jammies at the kitchen sink.

This week's song was more spiritual in nature.

An old hymn. The Love of God.

We sang it at Bible Study Fellowship. The lyrics swam around in my head for the rest of the week, just like most lyrics from most songs I hear.

When our voices united in this chorus, I was overwhelmed. Yes, by the love of God as the song so beautifully extols. So rich and pure. So measureless and strong.

I was suddenly overwhelmed not just by God's Love, but by the loving of God that surrounded me.

I don't know who it was, but someone was warbling her precious heart out.

It caught my attention. I just stopped and listened. Closed my eyes and felt the words sink in. Felt her love of Him.

I heard more voices, so many. So many around me, fervently praising. I became so filled, so full, overflowing, eyes dewy with tears, by the swelling of their worship.

The knowledge of all these faithful souls gathering. Feeling the same Spirit filling each one of us. Enveloping, ebbing and flowing, in and in between each one of us.

There we all stood. Sharing the same Best Friend.

Hundreds singing in unison. Hundreds opening their hearts and minds to know their Best Friend better. So many together, praying for personal closeness to this Friend. That others would get to know Him. That they might share this Mutual Friend.

I noticed out of the corner of my eye the most gorgeous woman. 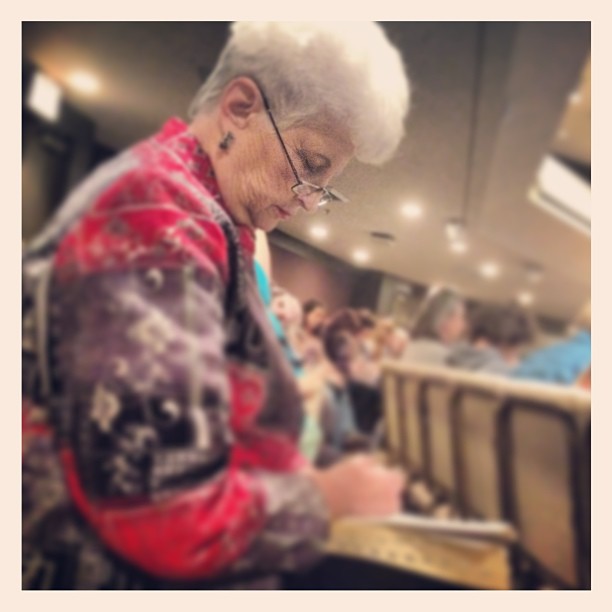 Everything about her was so beautiful to me in that moment. Dog-eared study materials, whole-hearted song emanating from within. Lighter hair than mine and a few more lines, tracking her life experience. She shone. From deep inside.


I closed my eyes and felt her singing of these words sink in. Her years surpassing mine. Our separate years of worshipping hitching on to one another. Her towing me along, in a great train of worshippers, traveling the same track.

I was swept up by her long life spent doing exactly this. Singing the great love of God.

You sat next to me at BSF this week. Your voice, your note taking, your fervent prayer. You swept me up along with you, drew me in to our family.

The sinews, tendons, tissue of our God's holy grace connected you and I, dear sister.

Connected us to one another, to those around us. To those in other cities, to my dearly missed sisters in Los Angeles and Illinois. To nameless, faceless brothers & sisters around the world. To those in centuries past and future. All beating to the rhythm of the same Heart.

Thank you for uniting with me in nothing but spirit. But most strongly and deeply. In our shared Spirit."

I was suddenly so thankful, for being a grain in this great sand. For being one of these many stars.

God did promise Abraham his people would be a great nation. More numerous than the grains of sand, than the stars in the sky.

There I stood, surrounded by my fellow specks and stars.

By so many, so beautiful in their worship of God. I felt so small and so large at the same time.

Such a tiny thing part of such a beautiful whole.

Overtaken by the many years represented in this room, the many days spent connected to the same Lord, and through Him, to one another.

I listened to the voices of my sisters. I let the song of my family seep into every fiber.

Inspired, spurred on, by such abounding faith in Him, study of Him, drawing toward Him.

I felt myself get swept up in this great wave of hearts, like a tide pulling closer to the shore, to our Lord.

I thought how many times these words had been sung, been given up to Him.

I read something this week about the key stanza in this song.

Could we with ink the ocean fill,

And were the skies of parchment made,

Were every stalk on earth a quill,

And every man a scribe by trade,

To write the love of God above

Would drain the ocean dry.

Nor could the scroll contain the whole,

Though stretched from sky to sky.

Were the sky of parchment made,

A quill each reed, each twig and blade,

Could we with ink the oceans fill,

Were every man a scribe of skill,

For He, most high, the earth and sky

Both authors wrote of mankind never being finished with the writing of God's love.

Never being done talking about it, singing about it. From 1050 to 2013, and before and beyond.

So many pens writing the same message in the words of each new generation. So many voices lifted, repeating the love of God. So many hearts united over the centuries in the same great wave of worship and closeness to the same Lord.

I caught a glimpse of something holy & wholly different this week.

A glimpse at what God may see when His family is gathered, hand in hand, walking the same road, toward the same destination.

I caught a glimpse at the union of the family of God, felt this union of Spirit deep in my soul.

This Sunday, every Sunday, in every gathering of believers, I hope you feel it.

I hope you get a whiff, feel the gentle tug of the tide, the pull of the same Spirit that we all share.

All of us tied together. One in Spirit. One in Christ.

Marie Osborne is a wife, mom, coffee drinker, loud laugher, & Jesus follower. When she isn't laughing with her husband, texting with her girlfriends, singing with her preschooler, or chasing after her toddler twins, she's probably writing at her blog while binge watching Netflix.