Who do you say that Jesus is? 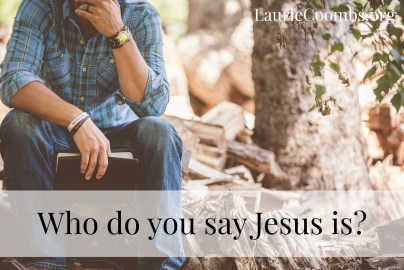 “Now when Jesus came into the district of Caesarea Philippi, He asked His disciples, ‘Who do people say that the Son of Man is?’ And they said, ‘Some say John the Baptist, others say Elijah, and others Jeremiah or one of the prophets.’ He said to them, ‘But who do you say that I am?’ Simon Peter replied, ‘You are the Christ, the Son of the living God.’ And Jesus answered him, ‘Blessed are you, Simon Bar-Jonah! For flesh and blood has not revealed this to you, but My Father who is in heaven….'” (Matthew 16:13-17, emphasis mine).

This question was asked of the disciples at just the right time. If we go back to the beginning of the Gospel of Matthew, we see that Jesus is born. He is baptized. He’s tempted by the devil. And then He enters into public ministry. He calls His first disciples, and from that time forth, Jesus begins to turn the world on its head as He teaches the ways of the Kingdom. Things people thought they knew crumbled in light of His teaching.

The first are the last.

The greatest are the least.

The rich are the poor.

Life is found in death.

Strength is found in weakness.

And then we see that Jesus not only taught the ways of the kingdom, but He brought the Kingdom as well.

He cleanses lepers. Heals the centurion’s servant. Calms storms. Casts out demons. Makes the paralyzed walk, the blind see, and the mute talk. He brings the dead back to life. Walks on water. Heals many of every sickness and disease. He challenges the religious culture of the day and its leaders. Feeds the 5,000 and the 4,000. And He calls His disciples, saying, “Come, follow Me…”

He claims deity. Claims authority only held by God. Says He is the way, the truth, and the life (John 14:6), says He is the only way back to the Father, rejecting the popular notion held even today that there are many ways to heaven. And He tells us He came that we may have a full or abundant life (John 10:10).

Who do YOU say Jesus is?

I heard a quote once that said the most important thing about a person is who they say Jesus is, and I believe this to be true with every part of my being. From the time of His death and resurrection, people have wrestled with this very question. Some claim Jesus was simply a good moral teacher. But I love what C.S. Lewis had to say about that. He said:

“I am trying here to prevent anyone saying the really foolish thing that people often say about Him: I’m ready to accept Jesus as a great moral teacher, but I don’t accept his claim to be God. That is the one thing we must not say. A man who was merely a man and said the sort of things Jesus said would not be a great moral teacher. He would either be a lunatic—on the level with the man who says he is a poached egg—or else he would be the Devil of Hell. You must make your choice. Either this man was, and is, the Son of God, or else a madman or something worse. You can shut him up for a fool, you can spit at him and kill him as a demon or you can fall at his feet and call him Lord and God, but let us not come with any patronising nonsense about his being a great human teacher. He has not left that open to us. He did not intend to. . . . Now it seems to me obvious that He was neither a lunatic nor a fiend: and consequently, however strange or terrifying or unlikely it may seem, I have to accept the view that He was and is God.” (Mere Christianity, 55-56)

If we continue to define Jesus as a great moral teacher, we reduce His teachings, namely all of the New Testament, to a moral guide that we can subjectively embrace or reject.

But if you have come to define Jesus as the Christ, the Messiah. As Immanuel, God with us. As the living God. As our Savior. Our Shepherd. Our Counselor. Our Comforter. Our Healer. Our Peace. Our only Hope. Our very life. If this is the answer you give when Jesus asks you, “Who do you say that I am?” then it demands all of us. If you and I say that Jesus is who He says He is, then we must lay down our lives and be all in.

Being all in means we surrender to Jesus, giving Him control over every part of our lives, not part of it. It means we live a life of repentance, turning from sin to Jesus on a daily basis. It means we choose to seek and do His will over our own. It means we receive the Bible as the infallible Word of God and submit to its authority. It means we receive Christ for who He really is, not who we’d like to make Him out to be. It means we actually do the Word of God and obey God’s commands. And though this is a far cry from an exhaustive compilation of what it looks like to be all in, it means both you and I follow Jesus on His terms, not our own.

So, what do you say? Want to be all in with me? Let’s do it. Let’s jump in together and see where Jesus takes us.

I’d love to hear your thoughts! Share them in the comments.

what home means now: new definitions to consider during the outbreak of covid-19
Jennifer Camp

Flourish in the Unexpected
Lisa Appelo