No Sin is Justifiable

Be angry and do not sin; do not let the sun go down on your anger, and give no opportunity to the devil. – Ephesians 4:26-27 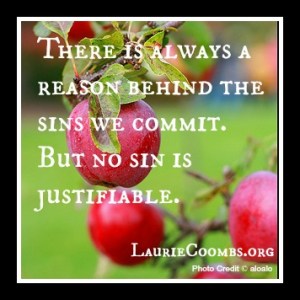 There is always a reason behind the sins we commit.

There is a reason I sometimes lose it and yell at my kids.

There is a reason I find myself rooting through my pantry, looking for something to fill me (though I’m not hungry), when I should be going to Jesus to be filled instead.

And there was a reason I stood in condemnation of Anthony, the man who murdered my dad, unable to forgive him for a decade.

The feelings we feel are legitimate. Sometimes, for example, we should be angry about the sins and atrocities committed in this world, for they anger God, and the anger we feel is what’s called righteous anger. But still, we must not sin regardless of whether or not there is a reason to.

NO SIN IS JUSTIFIED

A couple weeks ago, I said all sins are forgivable, and this is true. All sin is forgivable, but ultimately, no sin is justifiable.

This issue was discussed extensively with Anthony during our correspondence. There was a reason Anthony killed my dad. And at one point, things got pretty heated as we discussed just that.

I felt Anthony was justifying the murder, saying that in some way he was justified to kill my dad because there was a “reason” behind what he did. As you can imagine, that didn’t sit well with me.

I am in here with people who killed someone for no reason, or drugs or killed 2 people and have less time than me. I don’t think that’s justice. I am sorry.

We were discussing his sentence––life without the possibility of parole––which I believe is just for his crime. And when I read his words, I was set on fire. I responded and said,

…while you have said that you will “forever be sorry for what [you] did and how [you] hurt [my] family,”  your last two letters seemed to indicate that you’re justifying your actions by claiming you had a “reason” for killing my dad.  While I will never dispute the fact that my dad made some mistakes, there is absolutely no justification for what you did, and the fact that you had a “reason” for committing murder doesn’t make your actions any more or less of a crime.

Even though Anthony apologized for murdering my dad, I felt he was trying to justify his behavior. He, of course, didn’t see it that way. Anthony wrote back:

I have never said I had a “reason” for killing your dad but you wanted to know what led up to that day, what was my emotional state and such. I felt it was safe to give you an overview of the stuff leading up to it. This also seems to have been misconstrued as justification, not so.

Even though he maintained that he was not justifying his behavior, he repeatedly pointed to the actions of others involved, essentially saying, yeah I did it, but look what they did. When all I wanted to hear was, I did it. I am sorry. Period.

To Anthony’s credit, I asked him a lot of questions about the circumstances leading up to the murder. And he willingly gave me his perspective, which I am thankful for because it allowed me to gain greater understanding, leading to further healing.

Still, it felt as though he was using his “reasons” to justify taking my dad’s life. In my eyes, he was remorseful, but not yet repentant.

Months passed, and I was given grace to forgive despite Anthony’s justification. But then, I watched as Jesus began to change Anthony’s heart.

I needed to own what I did. I murdered a man. I did it…. I wanted to feel justified in what I did because the alternative was to hate myself, but when Laurie forgave me, she allowed me to forgive myself. I could also go to God humbly and ask his forgiveness. And God is so faithful, so I know I am forgiven.

Isn’t that why we all justify our sin? It’s difficult to live with ourselves once we come to understand that there is no one to blame but ourselves. Yet, there is comfort to be found in the forgiveness of God, which can be seen in Anthony’s story.

When we see his story, we see the power of God at work. God took an unrepentant murderer whose only option was to justify his behavior to escape self-loathing, and he transformed him by his grace. Jesus showed Anthony the Gospel. And Anthony finally came to a place of repentance and healing, as his excuses fell to the ground.

Through this process, both Anthony and I were shown that while the circumstances leading  to sin can certainly bring understanding, they are by no means justification for our actions.

{There is always a reason behind the sins we commit, but no sin is justifiable.} [Tweet that]

Question - Each of us have been tempted to justify our actions at one point or another. I now I struggle with this from time to time. How about you? Do you take full responsibility for your sins or do you tend to justify your actions or place the blame on others involved?

Where Is God in a Broken Marriage?
7 Prophetic Words God Has for Us about the End Times
5 Amazing Ways to Throw Satan off His Game with Worship
4 Burdens Mothers Always Carry for Their Children
10 Things to Never Say to Your Spouse under Stress
10 Things You Can Expect in a Relationship with a Narcissist