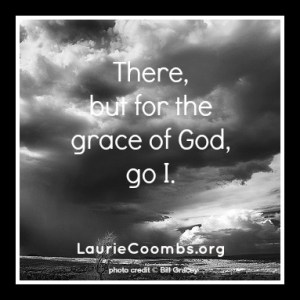 A 16th century Englishman by the name of John Bradford spoke the words, “There, but for the grace of God, goes John Bradford” as he watched his fellow prisoners being led to their executions. Bradford was imprisoned in the Tower of London for his Protestant faith, opposed by Queen Mary I of England.

John Bradford later died a martyr’s death, being burned at the stake. Now, I know this is heavy, but honestly, I believe we can learn quite a bit from Bradford’s death. The account I read says this:

Before the fire was lit, he begged forgiveness of any he had wronged, and offered forgiveness to those who had wronged him. He subsequently turned to his fellow and said, “Be of good comfort brother; for we shall have a merry supper with the Lord this night!” – Wikipedia

What an amazing man of God!

Forgiveness was the last sentiment upon his heart, not judgement. How easy it would have been for Bradford to judge those who harmed him, but instead, he “offered forgiveness to those who had wronged him.”

From Bradford’s quote mentioned above came the well-known statement, “There, but for the grace of God, go I.” [Tweet that] Bradford didn’t look upon the offenses of his fellow prisoners with condemnation. He––being a righteous man, imprisoned for his faith in Christ––didn’t judge the men around him for their sins. He didn’t lift himself up, while putting others down.

But instead, he knew his place. He knew he was no better than any other. He echoed Paul’s sentiments when Paul said, ”by the grace of God I am what I am” (1 Corinthians 15:10, emphasis mine).

Romans 12:3 tells us ”not to think of [our]self more highly than [we] ought to think.” Truly, we cannot stand in judgement of the sins of others. For the only thing keeping us from being in their position is grace.

Now to him who is able to keep you from stumbling and to present you blameless before the presence of his glory with great joy, to the only God, our Savior, through Jesus Christ our Lord, be glory, majesty, dominion, and authority, before all time and now and forever. Amen. – Jude 1:24-25

It is only by the grace of God that we are who we are. Therefore, it is not our place to judge. [Tweet that]