Are You Recovering or Preparing?

I always wanted a daughter and was ecstatic not to be pregnant anymore, after my firstborn was delivered; no more back pain, no more protruding abdomen, no more wondering what labor would be like, or contemplating what gender we would have.

Adam cried with awe and joy, while I was thankful to be through labor…a big fat check-mark off my lengthy lifelong to-do list.

It felt like I had climbed Mt. Everest and I was basking in the accomplishment of what the Lord and I had done in that delivery room.

I was high on adrenaline and felt like Superwoman.

Then it dawned on me, like a blinding light that hurts your eyes as it blazes through the windows, the work was not over, it was just beginning. What?! But I had just climbed Mount Everest how could any more be expected, especially when I had just laid it all out on the table? Now I had to nurse this precious one and forego the sleep that was desperately needed?

It seemed unfair, unreal, and unbelievable.

Can we freeze time for a Zack Morris minute and regroup? Can I just take a nap? I had at least earned that, right?

I had the deflated saggy gut and the beautiful prize to prove it: I was now a mother.

I had crossed the finish line and produced satisfying results. However, this was not a sprint, or even a 10K, it was marathon—more like an ultra-marathon. An exhilarating and exhausting journey lay before me, requiring more than seemed possible.

Years later, as I was reading C.S. Lewis’ classic, The Horse and His Boy, I stumbled upon a beautiful illustration of motherhood.

A little context first…Aravis and Shasta are two runaways, on their way to warn King Lune of an impending attack. On their journey they are hounded by a lion and barely escape his clutches. Aravis is wounded and remains at the sanctuary of a kind hermit while she recovers. Before Shasta can catch his breath, the hermit tells him that he must waste no time in finding the King and warning him of the coming attack.

Here is the section that gave me pause:

"Shasta’s heart fainted at these words for he felt he had not strength left and he writhed inside at what seemed the cruelty and unfairness of the demand. He had not yet learned that if you do one good deed your reward usually is to be set to do another and harder and better one. But all he said out loud was, ‘Where is the King?’” 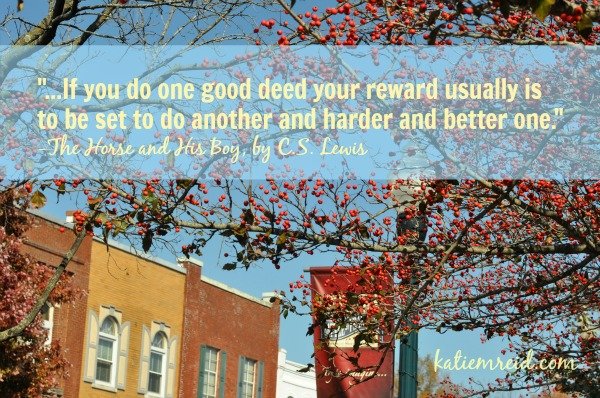 Not long after my daughter was born, as I laid in the delivery bed exhausted, relieved, and full of joy, I heard the words, “I think she’s ready to nurse” singing from one of the pediatric nurses. It struck me then, like a dissonant chord, that although the physical labor of childbirth was done, the labor of mothering was just beginning.

I was overwhelmed with the magnitude of this news. Keep laboring? But I just did that.

Like Shasta, I wish I would have called out in that moment, “Where is the King?” Maybe not audibly, but in my soul, the place of greatest need. Because King Jesus was the only one who could prepare and sustain me for the task at hand, not just the nursing but the raising of this little life.

I thought I knew so much, but there was so much, still is so much, to learn.

I thought I arrived with the delivery of this life, but the King used her arrival to deliver me.

*excerpt from my memoir-in-progress

I share this story today to help illustrate a point that Annie Downs made this weekend at the Grace Adventures Women’s Retreat. She said something like this,

“What if this rest is not to recharge but to prepare you for the new thing that is coming?”

Annie referenced Jefferson Bethke’s new book, It’s Not What You Think and how he pointed out that Adam and Eve were created on the 6th day, so their first full day on earth was the seventh, when God rested.

Could it be they rested so that they were ready for what was to come?

All this time, I thought that this month of the Restoration Project was to recover from a busy season, and while that may be partially its purpose, what if it’s more about preparing us for what’s to come—what’s next?

This thought is both exciting and a little exhausting. It reminded me of how I felt all those years ago in the delivery room. I had just given birth, which felt like such a big thing, but the really big thing—of raising a life—was just beginning. One challenging, yet wonderful event was followed but an even more challenging and wonderful season.

Maybe all this unwinding through rest and prayer is more about being prepared and equipped for what’s coming?

Are you preparing well?

Are you ready to welcome in the new thing, the next thing?

*This post first appeared on katiemreid.com as part of the Restoration Project series.