God Puts the Team Together

She had said it a few nights before, as we sat in the living room of our missionary friends, reflecting on the week spent in Haiti.  Someone had expressed their appreciation for the way our team had cooperated…gelled, really.  This particular crew had just clicked, it seemed.

“We always think we know who we want to go on the trip,” she thoughtfully acknowledged, “we say that we would like certain people to be able to go with us…”

She went on with affirming wisdom, “But I always say that God puts the team together.”

There on the plane, seated beside her, I had looked at the rows in front of me.  My eyes caught the backs of our team members, each settling in for the flight home with a book, travel pillow, or headphones.  Some were laughing and talking to one another and a few prepared for a morning nap.  Around me, seatbelts buckled and flight attendants bustled and I felt a lump in my throat.  I was beyond thrilled to be home with my children and my husband.  I missed them terribly.  At the very same time, my heart sank a bit to know that this group of people would likely never serve together again in Haiti.  We were together for such a time as this.

My childhood ballet instructor had always said it as we held hands in a circle, after warming up in our black leotards just before the theater house opened on the final night of a ballet performance.

“This very group of people will never be together again.”

…I’ve often relived those words.  I’m highly nostalgic like that, you know.

I leaned over to the aunt seated beside me and said, “God really does put these teams together.”  She probably thought I was suffering from some serious sleep deprivation in that moment.  It was random, I have to admit.

Fast forward a year.  Last year, I was the very last person to join the mission team.  It had formed.  I had not witnessed the coming together of that particular crew.  I signed up, with every single detail in place.

Oh…but this year.  This year, I was the very first person to sign up for our team.  In fact, I was quite certain that God had put this in my heart but was every bit as certain that He was not calling me to lead the team.  (I still stand by both of those convictions with great peace and plenty of affirmation.)  I began to pray. I began to pray that God would send our team a leader.

He provided.  Our friends called us and told us that a man from their parents’ church was hoping to put his team with our team and that he could be the team leader.  And by the way, this team leader just happened to be from the family that founded the very place we will be visiting and he just happened to spend the biggest part of his childhood living in the place that is now the guest house.  You know…he could lead a team there.  Not to mention his nearly fluent grasp of Haitian Creole.  Wow.  Thank you, God!

What happened next?  I am still in awe, sweet friends.  This year, I was blessed to watch God’s handiwork unfold in front of my eyes as person after person said, “You know, I’ve been praying about going to Haiti.”  The next person to sign us was a man in the medical field with a heart for missions.  Next, a woman in the medical field signed up.  While I know her because of her connection to my family, she just happens to be the next door neighbor of a couple who work as long-term missionaries in our destination.  Then, two brothers signed up after I mentioned it to one on a Sunday evening as we were all picking up kiddos from children’s choir.

“I’ve been praying about that, actually!” was his nonchalant response.

Next was another mission-minded (and very well traveled…praise the Lord…because I am not) lady from our church.  Soon, her sister and brother-in-law learned that their churchwas cancelling  their trip to Haiti due to some unforeseen circumstances and with great enthusiasm, we welcomed them aboard, excited because all three have a huge love for missions and bring a history of missional experiences to our team!  One member has a heart for story-telling and works to learn her testimony in the language of the country she travels.  What a blessing for our team!

As the pieces of this puzzle fell into place beautifully, I put an all-call out on social media saying something like, “Our Haiti team is filling!  Let me know if you have an interest in joining us this summer!”

I recieved several messages soon after that post.  Some friends have learned that the dates wouldn’t work for them while others continued to pray through the decision and the timing.  One particular response surprised me when I learned that my husband’s cousin had been praying about missions for a few years.  Before I knew it, she was joining our team as well, adding to the team’s heart for children and the medical profession of our team.  …not to mention her life-long love for adventure.  I cannot relate.

The team continues to blossom into something for a purpose that only God foresees, at this point.  The most recent team member committed as I wrote this post: a good friend with the most nurturing spirit and welcoming personality of…pretty much all the people in the world.  This girl can connect with people deeply and meaningfully in one conversation.  I always say that she has a hospitable life.  Every part of her life welcomes others in and her testimony offers hope.  What an asset to a team!  Am I right?!

Me?  I am simply amazed.  God continues to build this group of people.  I’m slightly enthusiastic and basically shouted, “Who wants to go to Haiti?” everywhere I went the past two months.  There were some takers, praise Jesus! The timing wasn’t right for so many of the family members or friends that I invited (…and perhaps there was some begging involved) but God’s plan is and will continue to unfold in front of us in the coming months.  He is working and I can see it.  I’m a planner…I can be a worrier.

I had prayed, “Lord, will you please send us a team leader?  …and you know…maybe someone well-traveled, or medical, or stronger than me, or maybe a friend or two…just someone else to go with me???”

In retrospect, I can clearly see how much more brilliant His plan is than mine.  Always.

He is writing His story in every aspect of all of our lives.  He is writing this story. I am overwhelmed at His abundant provision.  God always has a plan.  He always has a purpose.  This little mission team is no exception, because He is capable of working in the big things and the small things simultaneously.  God is THAT good.  If He is at work in both the big and little things (and He totally is, I tell you) then I wonder how it is that we miss His beauty, sometimes.  Perhaps, it is us.  Could it be that maybe we aren’t in the habit of watching and admiring the goodness of God’s faithfulness?

This time, I can see it.  It is true what she said:

God puts the team together.

May we always have eyes that watch for the power and mercy of God.  May we see His loving kindness to get a glimpse of His heart or maybe just a bit of His unfailing love written boldly throughout His plan for His children.  His love never fails.  Every good gift is His gift.  I am in awe.﻿ 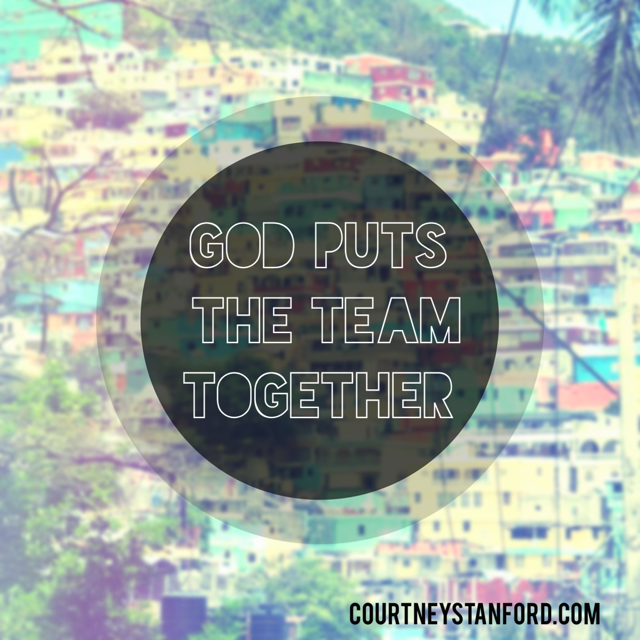