Is doubt robbing you from faithfully moving forward in life? Doubt is like a mountain right in front of you. It doesn't make getting to your destination impossible, but it sure does make it much more difficult. As I'm moving forward with some things the Lord is calling me to do, I've recently found myself facing doubt more frequently.

Some of the things that I'm trying to accomplish I've tried before and did not succeed. You'd think trying something for the second or third time would be easier as you've learned from the past. In many ways, it is, until doubt comes along and you find yourself questioning if you're really ready this time, what if you fail again, and wonder if you're just wasting your time and energy.

Doubt sucks the passion and energy we once had for a matter with the specific intent of suggesting we stop while we're ahead. However, as I was praying to the Lord at church this past Sunday, He placed an encouraging word in my spirit: Doubt can only make you think you're defeated.

Doubt is an opinion. It's not the truth.

When the prophet Elijah knew that a 3 and a half year drought in the land was about to end, he called for his servant to go towards the sea to look for any sign of rain. We read about it in 1 Kings 18:43-44 that says:

At Elijah's request, his servant went to see if there was any sign of rain, came back, and reported there was nothing.

So the servant went, looked, and came back with the same report. There was no sign of rain. There were no clouds. There was nothing.

Now let's put ourselves in the servant's shoes. Can you imagine his potential frustration? Can you imagine the doubt he may have incurred? Going back that many times with the expectation that nothing had changed because up until the seventh time nothing had changed. See if Elijah had not sent the servant I don't think he would have gone. He very well may have stopped at the first report, never to see God's faithfulness fulfilled by the ending of this drought.

And I wonder how many times we miss God's promises fulfilled in our lives because we stop at the first report. We give up after the first try. Or the second try. Or the third try.

Our God is a promise keeper, but doubt will prevent us from seeing His faithfulness in our lives. Doubt tells us to stop when we really need to go again.

The Israelites marched around Jericho 7 times before the wall fell, Elijah sent his servant seven times to look for a sign of rain. Moses led God's people circling the wilderness for 40 years. Sometimes you have to go again. Over and over again to get where it is God that is taking you. We want the journey to be a straight shot. But God is more concerned with working on our hearts than simply getting us to a desired destination with the shortest route possible.

Sure doubt is going to make you want to quit. The enemy will be right there in your ear:

And the weight of serial failure will make you want to stop. But if we're talking about something that God has called you to. If it's experiencing the manifestation of God's promise in your life, then you have to go again.  Because if God's hand is on it, the enemy can only make you think you're defeated.

Doubt says you're wasting your time.
Faith says God is working it out in His perfect timing.

Doubt says it won't work out.
Faith says God is in control.

Doubt says it's beyond repair.
Faith says God has the final say.

Doubt says the dream is too big.
Faith says, My God is bigger.

Just because your path may look crooked, or you find yourself rounding the same corner for the 10th 11th or 12th time. Go one more. Don't give up. Push past the doubt and exercise a level of faith that moves the mountain of doubt in your life. Go back, do it again, try it once more and if it doesn't work out, go again, go again, go again!

Now I'd love to hear from you, Beloved. Please comment and let me know, what mountains of doubt are you facing in this season of your life and what encourages you to keep going anyway.

Before you go, I want to share with you a free video Bible Study and prayer guide I created just for you. It's called "Worry-free" in it you'll learn the three major lies feeding your Worry and the truth that can set you free.

If you no longer want worry to control your decisions, feelings, and actions and you're ready to develop a stronger faith in God visit BelovedWomen.org to download this free video Study today! 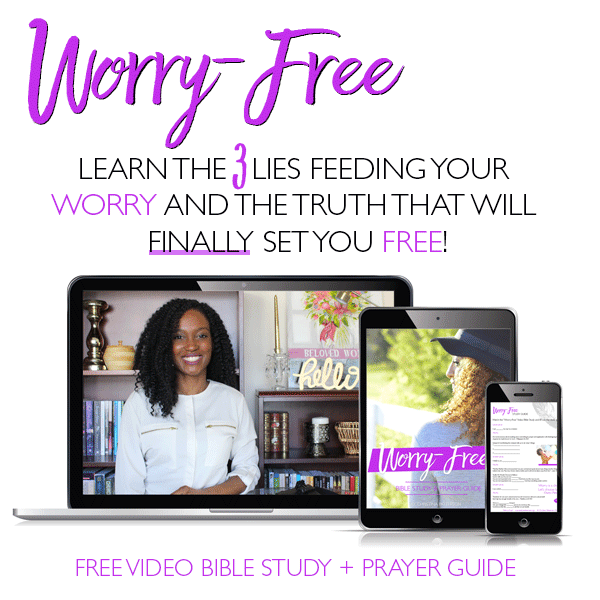 For even more Beloved encouragement including Daily Devotionals, practical advice for everyday Christian living, Bible studies are more be sure to download the Beloved Women mobile app variable for free in the Apple and Google Play stores or visit us online at www.belovedwomen.org.