Carmen writes the blog, Life Blessons, which provides an intimate look into her life as a twenty-something woman as she details her experiences learning how to live out her faith, enjoy the simple things in life and be the woman God created to her to be. Along the way, she shares the blessings and lessons that are a part of this journey, the things she likes to call her "blessons." Feel free to read more at her blog, Life Blessons. 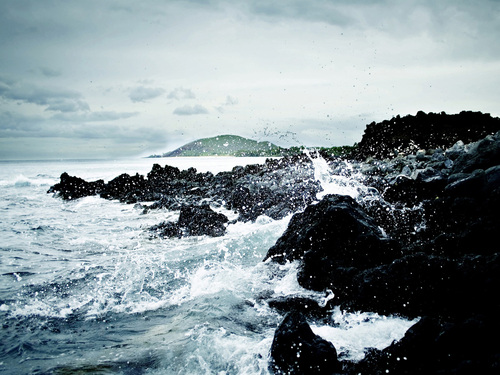 EDITOR'S NOTE: I wrote this following post in the days after being discharged from the hospital. Since writing it, I am actually finally starting to experience some healing (praise God!) and we have more answers from doctors (though it has been a fight to get them) and believe the culprit was in fact a kidney stone (though they originally ruled that out). We have follow-up appointments with a specialist this week to ensure that my body is self-healing and whether any additional treatment is needed. However, I still wanted to share this post as a way to document where I have been and how God has been pulling me through it... More on the medical progress once we've had the chance to meet with more doctors!

I have now been released from the hospital for a few days. (You can catch up on all that drama here.) And while it’s so good to be out of the hospital—where we were cramped in a small room in the most uncomfortable of beds and I was hooked up to an IV and the most undignified of hospital that left me feeling trapped within those four walls—alas, life is still no picnic.

What sent us to the hospital in the first place was not necessarily the severe pain but the fact that it was causing me to vomit and not be able to eat or drink anything. That, in turn, caused me to go into contractions. The hospital was good for me, because it stopped the contractions and the nausea so that I’ve been able to eat and drink regularly without incident.

But the pain that started it all remains. It wakes me up and keeps me from being able to stand up for more than 10 or 15 minutes at a time. It limits me to only being able to sit straight up, at a 90-degree angle, or else suffer the consequences of pulsing hips and flanks. It makes laying down for sleep a chore, and one that often brings me to tears as my husband tries to help me find a position that provides relief—oftentimes, to no avail. It causes me to be tired more than I am alert, and incapable of doing the most simple of household chores. I haven’t washed a dish or made a meal or even gotten the mail since coming home. And while that might sound heavenly, it’s turned out to be a bit of a burden to not even be able to help out.

At times, it makes me cry thinking about how I can endure this for four more months. Because as of right now, they still do not know what is causing the pain nor how to alleviate it.

But, in spite of all this pain, God is showing himself to me, giving me glimpses of hope through it.

For instance, in the hospital, we got shuttled around from one doctor to another, each of whom saw us for five minutes or so before disappearing. One doctor called in an appendicitis surgeon to make sure I wasn’t suffering from appendicitis. He came in and met with us and quickly determined it likely was not appendicitis. And yet, he didn’t leave.

He stayed with us and talked about the pain and agreed with us that it probably had something to do with my kidney. That is not his area of specialty, but still he took up my case and went around to different experts with my case to see what could be done. He consulted with a radiologist about tests that we could do that would be safe for the baby.

He consulted with a kidney specialist about the findings that showed that, yes, the problem was with my kidney. (Though, it should be said, the urologist doesn’t think anything’s wrong with my kidneys, but it’s the way my uterus is expanding that’s causing fluid build-up—a case he said he had never seen before in 30+ years of practice.)

And then the surgeon went back to the OB/GYNs and advocated that they bring me in to look into this further. The OB/GYN asked him why he was so concerned about this—I wasn’t even his patient! But he said that he sees being a doctor as helping a patient, however you are able. Sometimes that’s by taking up your scapel, but sometimes it’s by facilitating with the other experts.

So I thank God for this surgeon, who has done more for us than any doctor actually assigned to us. I know without a doubt that he was a gift to us from God in this situation. We were so impressed by him that when we came home, I wanted to write him a thank you letter. My husband went online to find his address and came across his bio, in which it becomes pretty apparent that he’s likely a believer.

And it just makes me smile to think of how God is working in this for us, even if it is much, much more slowly than I’d like and lacks any of the miraculous healing that I’ve been praying for. He still is at work and still has much to do.

So for now, while we wait on more tests and more answers and hopefully more experts to weigh in on my situation, we hope and we pray and wait most importantly on the Lord, for “I wait quietly before God, for my salvation comes from him.” (Psalm 62:1)

Carmen writes the blog, Life Blessons, which provides an intimate look into her life as a twentysomething woman as she details her experiences learning how to live out her faith, enjoy the simple things in life and be the woman God created to her to be. Along the way, she shares the blessings and lessons that are a part of this journey, the things she likes to call her "blessons."

Feel free to learn more at her blog, Life Blessons.

Related Posts from Life Blessons
Listening to that Still, Small Voice
A Prayer for Joy

Carmen writes the blog, Life Blessons, which provides an intimate look into her life as a twenty-something woman as she details her experiences learning how to live out her faith, enjoy the simple things in life and be the woman God created to her to be. Along the way, she shares the blessings and lessons that are a part of this journey, the things she likes to call her "blessons." Feel free to read more at her blog, Life Blessons.