Why Cinderella Had to Have Her Heart Broken
Tweet

Why Cinderella Had to Have Her Heart Broken 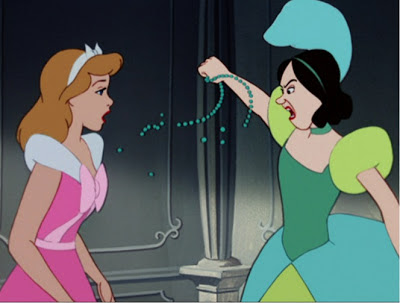 What if Cinderella said "yes!" to the pink dress? The dress that her mice-friends made? The one her stepsisters ferociously tore into the minute they saw her in it?

I've been obsessed and heartbroken by this part of the story since I was a little girl. In all honesty, it was an introduction to something other than goodness in the world. Could stepsisters really be that cruel? Could hard work, and good people bend really bend so easily under the pressure of evil?

It didn't seem fair. I wanted the best for Cinderella. She was good, right and beautiful. She didn't deserve to be treated as she was.

But, let’s say, for a moment, that Cinderella’s stepsisters had spared her the heartache of ripping apart something she cared about, and felt so lukewarmly lovely in?

In the original mice-made outfit, Cinderella would be one of those girls on Say, “Yes!” to the Dress! She would have been standing on the clean, white pedestal before the glowing wall-sized mirror, in faux blue beaded pearls and a homemade dress that didn’t even touch the ground.

Randy Fenoli in all his flamboyant tentativeness would clasp his hands to his lips, in near tears as he faux-mired the DIY disaster in front of him.

“No, Cinderella!  No!” the 18 to 34 year-old female demographic would yell into their television sets over their fluffy bowls of buttery popcorn.  “That’s not even a ball gown, Cinderella!  It’s an a-line.  AT BEST, IT’S A-LINE!!!!”

But, regardless of  Cinderella would have stood there, so humble and gracious. She would have uttered a mouselike, “Yes,” to a pink poodle skirt if it meant she was able to go to the ball.

But, of course the story wouldn’t stop there. Cinderella would have been whisked off to the kingdom’s palace in a standard horse and carriage (that in no way resembled a pumpkin) in an inconsequential gown making for an inconsequential evening.

This scenario would have lead her to her greatest heartbreak of all time.

Because, once she arrived alongside her motley crew, her stepsisters may have had her painted against the wall. She may have been physically present at the ball, she may have even had the chance to bob her head along to the latest Justin Timberlake tunes...

But don’t think for a hot second her stepsisters and stepmother would have let her bat an eyelash and dance with the prince. Not on their watch.

Cinderella had to get to the ball alone.

The whole story wouldn’t have worked if her first dress wasn’t spoiled and if her heart wasn’t broken. Her abandonment by her family, and her torn dress gave the fairy godmother a chance to intervene. Cinderella had to endure the tearing of the dress moment.

And that moment, though difficult for five-year-olds everywhere to watch her endure, was actually a powerfully good moment.

I’m sure,  looking back, Cinderella, the heroine that she is, would have possessed enough wisdom to thank her stepsisters for their blind evilness.  The actions of those wicked young vipers was ultimately her ticket to the royal ride of the rest of her life.

She got a fancy carriage, glass slippers and a prince’s arm to hang on to.  Cinderella got another pretty dress.  But the heartbreak had to happen first.

That’s where, I think, God begins moving in our lives.

God always seems to start somewhere in between "once upon a heartbreak" and "another pretty dress."

He unfolds in the spine of your real life story right in between one or several thousand injustices. He starts when the temporary beauty you once felt was ruined. He begins at the place when grace and redemption come to the rescue.

This begins when you become thankful for the heartbreaks and hardships you’ve faced.  Because you realize it is those moments that brought you to another pretty dress.