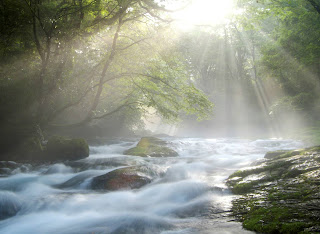 Excerpt from - Face to Face: Seeing God Through the Eyes of Those Who Met Him Face to Face.

Unbeknownst to her, Jesus had an appointment with her. He reclined against the edge of the well, waiting for her to come draw her water in the middle of the day. She always came at this time, when the scorching heat kept the scornful women away from the well. She wasn’t like the other women.

Her mistakes and heartache seemed to define her. She came to the well to draw from it’s deep waters. She’d cast her hopes down into wishing wells for years; wishing wells of men and relationships that kept coming up as dry as yesterday’s water jug. Jesus interrupted her thoughts and asked her for a drink. She replied with a bit of shock and defensiveness. Not only was there a serious racial boundary between them, but just in case He hadn’t noticed, she was a woman! He wasn’t supposed to talk to her!

In truth, He hadn’t really come to get water, but rather to give water--Living Water. By the end of their discussion, she had been gently convicted of her sin with so many men, but she’d also seen the One with the water who could cleanse and satisfy her. She dropped her waterpot and ran into the town with the good news of the One she was pretty sure was the Messiah. The townspeople must have seen something different in her already and they followed her out to meet Jesus.

Like the woman at the well, Jesus holds out a gift to you. He holds out soul satisfying, quenching, cleansing water. Just like His conversation with the woman, He also wants to get personal with you. The woman arrived at the well as a person with mistakes that defined her, she left the well as a woman with a mission and a message. God wants to do the same in your life. Lastly, the woman left her waterpot at the well. The stuff you’ve used to get satisfaction in this life should be left behind, God has something much better for you!

For more encouraging words, order the 31 day ebook devotional Face to Face: Seeing God Through the Eyes of Those Who Met Him Face to Face.

You can also get more devotionals, resources and freebies by following Motl Ministries through email, fb, twitter or on pinterest.