What Is the Meaning of Lent? - Biblical Meaning and Purpose
Tweet

What Is the Meaning of Lent? - Biblical Meaning and Purpose

What Is the Meaning of Lent? - Biblical Meaning and Purpose

Lent is meant to be a time of repentance. These 40 days are set aside to praise and worship the Lord; to read the Bible more, and to pray more often. Christians who observe Lent correctly anticipate deeper intimacy with the Lord.

Many Christians have heard of Lent, but do all know what it means? According to Merriam-Webster, Lent means "the 40 weekdays from Ash Wednesday to Easter observed by the Roman Catholic, Eastern, and some Protestant churches as a period of penitence and fasting."

Between Ash Wednesday and Easter, many Christians observe a 40-day period known as Lent. This name comes from the “Old English lencten springtime, spring” and “from West Germanic langitinaz long-days or lengthening of the day.” Popularly regarded as a period of fasting, there are many ways to make the Lenten period meaningful without missing meals. What is Lent and why should one take part? Does every participant follow a strict Lenten plan of rigid self-denial?

The History of Lent

Christians honor the 40 days and nights following Christ’s baptism when He went into the wilderness without water and food and was tempted by Satan. During that time, Christ did what we do today when we fast: wrestle with temptation. This was not the first fast; biblical figures often fasted when petitioning God for something important. “So we fasted and implored our God [...], and he listened to our entreaty” (Ezra 8:23). The Israelites “mourned and wept and fasted till evening for Saul and his son Jonathan, and for the army of the LORD and for the nation of Israel, because they had fallen by the sword” (2 Samuel 1:12).

Before going to her husband to intercede for the Jews, Esther told Mordecai, “Go, gather together all the Jews who are in Susa, and fast for me. Do not eat or drink for three days, night or day. I and my attendants will fast as you do” (Esther 4:16). Jews and Christians have historically fasted to show repentance, to grieve particularly difficult trials, and to “seek God’s favor.”

While Protestants also take part, Catholic churches are particularly associated with Lent. No church history indicates the year when believers first took part in the tradition or what was required. Lenten fasting “has consisted of abstaining from all animal products” for some, but “for others, fish and/or poultry were allowed.” Certain societies have permitted “only bread” for a time. There were full-day fasts; half-day fasts; and the potential to pay money in order to be excused from participating.

What Does it Mean to Participate in Lent?

In other words, there are numerous ways to approach Lent, some more legalistic than devotional. Still, the origins of Lent seem to be rooted in Christians giving up food or money in order to emulate Christ’s obedience to the Father.

Community fasting provided accountability and support, but also led to pressure and judgment. Today, “some still observe fasts that restrict quantity and type of food,” but “many view Lent as a time in which to give up a particular vice, bad habit, or pleasurable thing.” In the 21st century, Christians frequently use the fasting season to motivate them to continue with New Year’s resolutions in a blend of secular and Christian observance.

Lent is also associated with Ash Wednesday, the first day of Lent, where “some Christians mark their foreheads with ash as a symbol of sorrow and mourning over their sin.”

Then I turned my face to the Lord God, seeking him by prayer and pleas for mercy with fasting and sackcloth and ashes (Daniel 9:3).

There was great mourning among the Jews, with fasting and weeping and lamenting, and many of them lay in sackcloth and ashes (Esther 4:3).

The word reached the king of Nineveh, and he arose from his throne, removed his robe, covered himself with sackcloth, and sat in ashes (Jonah 3:6).

Job 42 associates ashes with repentance, an association borne out over and over in scripture. 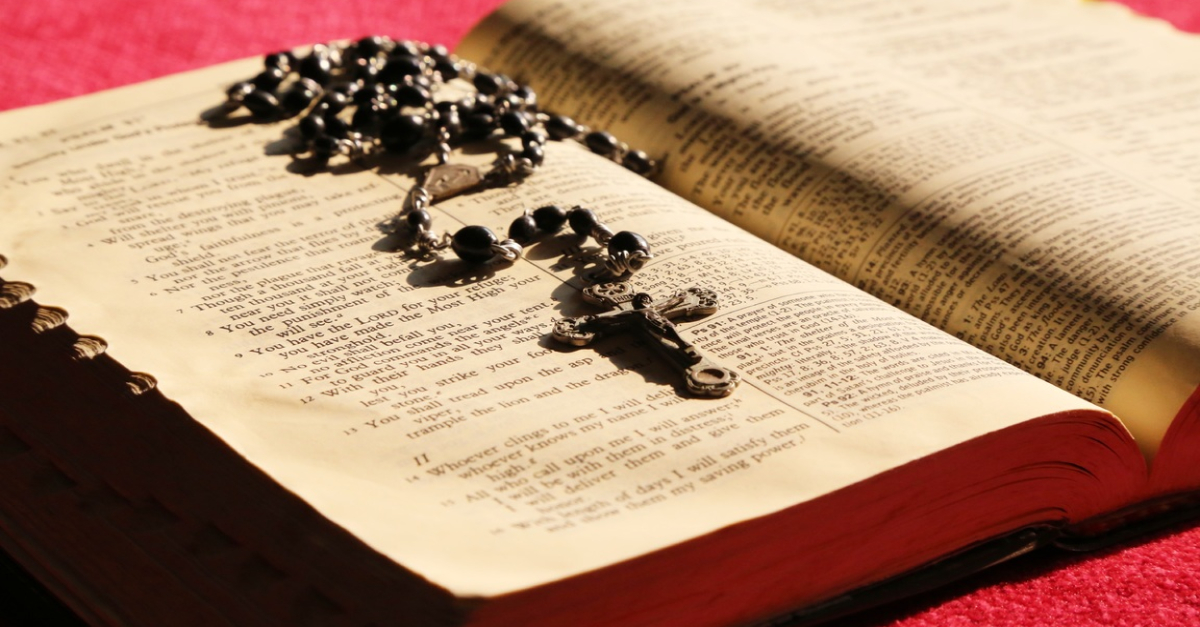 Lent is meant to be a time of repentance. That’s not a feeling of shame, but an awareness that sin separates us from God and of what it cost Him to be reunited with us. “Shame has its place, but feeling shame over sin is not the same thing as repentance from sin” because “our tempter can take our obedience to God and turn it into a source of pride.”

Repentant sinners “seek […] cleansing from sin, but also freedom from shame.” True repentance leads” to a “180-degree change of [...] direction,” requires “true brokenness,” but repentance starts with “regretful acknowledgment of sin with commitment to change.”

That is why conflating Lent with New Year’s resolutions is dangerous. This time of fasting should not add religious encouragement to a difficult goal: to lose weight, stop watching pornography, or to give money to charity. “Lent is [...] an opportunity to contemplate what our Lord really did for us on the Cross.”

Resolutions focus on meeting self-set, self-motivated goals rather than goals established by God and may even rebel against His purposes. Resolutions reflect a desire for autonomy from God instead of recognizing that the body is the temple of the Holy Spirit (1 Corinthian 3:16, 6:19) and the work of the potter, to be regarded as precious (Isaiah 64:8).

Resolutions simply focus on “self,” not Christ. Lent is a good time to give up one’s own resolutions and listen for God’s leading. Where God leads might be more difficult than any fast, and, here, Christians realize that they cannot do anything in their own strength either: only the grace of God is sufficient (2 Corinthians 12:9).

Greater intimacy with God is the reward of sacrifice. His love and one’s salvation are not reliant on denying oneself chocolate or beer, but idolatry stands in the way of worshiping the one true God. These 40 days are set aside to praise and worship the Lord; to read the Bible more, and to pray more often. Christians who observe Lent correctly anticipate deeper intimacy with the Lord, which is the blessing; they do not expect rewards such as more favorable answers to prayer or the resolution of health concerns, although many Christians have reported that, following Lent, they experience freedom from long-standing issues.

Many Christians prefer not to observe this pre-Easter tradition because it smacks of religious duty. Christ said of the Pharisees that “They crush people with unbearable religious demands and never lift a finger to ease the burden” (Matthew 23:4). He often criticized the Pharisees for disheartening the Jews with demands that missed the heart of God. Christ did not establish the tradition of Lent as some kind of commandment for followers to observe. Choosing to participate or not participate is a matter between the individual and God.

What Are Your Motives?

“It is important to check one's motives for observing Lent. Christ told the disciples “when you fast, do not look gloomy like the hypocrites, for they disfigure their faces that their fasting may be seen by others. Truly, I say to you, they have received their reward" (Matthew 6:16). A small personal sacrifice should not be “a badge of pride.” The intent of a Lenten observance is to recognize our need for repentance and our depravity apart from God (1 John 1:9; Ephesians 2:1-5; Colossians 2:13), to draw closer to God, and to prepare our hearts for the celebration of Easter.”

Is Lent a matter of obedience to tradition or obedience to God? A means of achieving works-based salvation or of giving praise and thanks to Christ that He finished that work for eternity? A way to achieve a resolution or a means of growing closer to the Father?

Undertaking something difficult (giving to charity, serving the poor, abstaining from certain foods, memorizing Scripture) makes one feel needy and weak; humble: the perfect posture from which to approach God Almighty. For people whose lives are generally easy, Lent is a time to empathize better with those who genuinely go without luxuries or even simple needs. Lent can help establish a stronger sense of one’s need of God minute by minute and to develop a more disciplined, intimate, and authentic prayer life.

How to Practice Lent

1. Name the pressing sin. Christians are taught to begin the 40-day period by confessing sins they would like Christ to remove; to “really examine areas of recurring sin” which are a hurdle to “being conformed to God's will.”

2. Partner with other Christians. Historically, entire church congregations would support one another during Lent. Although Christ instructed “when you give to the needy, do not let your left hand know what your right hand is doing, so that your giving may be in secret,” (Matthew 6:3-4), believers keep each other accountable. “Self-disclosure brings forth humility by making it your responsibility to humbly open your soul to those to whom you are accountable. [...] You are a witness to your own life, sharing truthfully, freely, and happily with little or no provocation.” Devoted friends encourage each other to be specific in their prayers and help one another seek Christ’s strength to stay the course.

3. One’s “fast” should feel like a sacrifice, but not religious duty. Nor should the fast be dangerous to one’s health. Consider giving up one meal a day, a regular treat, coffee, or alcohol. Other sacrifices include increased charitable giving, staying away from social media, service to the community, or memorizing scripture.

4. Time with God is critical. Quiet and solitude enable one to listen to the Spirit and discern answers to prayer. Before the noisy corporate rejoicing of Easter Sunday, create opportunities for peaceful contemplation and intimacy with the Father. No matter how prayers are answered at the end of 40 days-no, yes, or wait-time with the Lord is cause for joy, praise, and thanks.

Candice Lucey loves Christ and writing about His promises brings her much pleasure. She lives in the mountains of BC, Canada with her family.

Is Fear Keeping You from Trusting God?
5 Meaningful Ways to Restore Your Prayer Life
7 Lies Your Children Face during Their College Years
10 Bedtime Prayers You Can Pray Every Night

Is Fear Keeping You from Trusting God?
Heather Caliri