What if Following Jesus Takes You Where You Don't Want to Go?

My birthday was two days after we received our daughter’s diagnosis.

The day after my birthday was Easter. It came early that year. The day we celebrate the resurrection of our Savior Jesus who defeated death once and for all. The day that magnifies everything the word hope envelops. Hope beyond the grave, hope beyond our buried dreams; hope that rises when all seems lost. And not just an arbitrary, theoretical hope, but also the hope that lives in the person of Jesus Christ. The Hope that is The Anchor for our soul.

Easter had never held such power as it did this time. For I needed to not only grasp the hope of the death and resurrection of my Savior more fully, but also the reality that His resurrection power could still give life to these broken places of my heart. I sat alongside the five hundred men and women in the sanctuary of our church the morning of Easter. And I was overwhelmed by the goodness of God to send His only Son to die on the cross, the worst suffering imaginable, so I could have life.

How could I question the depth and width of His goodness and love?

Yet I questioned it. I wondered in the finiteness of my mind how this was His goodness and love to us?

Intellectually I understood that in some strange way extending far beyond the wisdom of man, this was in fact His goodness and love to us. But I didn’t for the life of me understand it. I desperately wanted to wrap my mind around the goodness of God shrouded now in so much mystery to me.

Later in the afternoon, I was reading the story of the resurrection in the Book of John. My eyes caught a passage I had highlighted, who knows when, on the other side of the page. The words “and carry you where you do not want to go” were underlined ( John 21:18 ESV).

Yes, this was me. Every. Single. Day.

“I don’t want to go this way; I don’t want this to be my story” was the agonizing cry of my heart to the Lord, to myself, to Kevin, to the wall, to the wind. I needed to read this story.

An Invitation to Keep Following Jesus

In this passage, John 21, Jesus has risen from the dead and was appearing to His disciples. I’m confident His appearance was overwhelming and I’m sure a little confusing and terrifying. They had just seen Him die the most horrific death a man could die, and here He was standing before them.

Jesus is with Peter and His other disciples, finishing what would be their last and final meal together, when He turns to Peter and asks, “Simeon [another name for Peter], son of John, do you love me more than these?” (v. 15). Peter, who no doubt was still reeling in shame and disappointment that at His Savior’s greatest hour of need, he had denied Jesus not once, not twice, but three times just days earlier. He was now about to be asked three times from his resurrected Savior of His love for him. As Peter responds each time, “Yes, Lord; you know that I love you” (v. 15), Jesus proceeds to tell him to “Feed my lambs” (v. 15). It is only after the third time Jesus proceeds to tell him the following:

“Truly, truly, I say to you, when you were young, you used to dress yourself and walk wherever you wanted, but when you are old, you will stretch out your hands, and another will dress you and carry you where you do not want to go. (This he said to show by what kind of death he was to glorify God.) And after saying this he said to him, ‘Follow me.’” ( John 21:18-19 ESV)

Trying to Make Sense of It All

Wait. What? Peter just told You three times he loves You, and this is what he has to look forward to? To learn he will die in the same way as his Savior. After Jesus told him this, Peter immediately looked to the disciple sitting next to Jesus and said, “Lord, what about this man?” (v. 21). Wouldn’t that be your next question?

“But I did want to follow Jesus in it and through it.”

But it’s the words of Jesus that followed Peter’s last question that stung my heart. “If it is my will that he remain until I come, what is that to you? You follow me!” (v. 22).

The words echoed off the walls of my pain and confusion.

I didn’t want to walk this path, and I was quite sure I wouldn’t ever want to. But I did want to follow Jesus in it and through it.

Not a Joyride, but a Life Filled with Joy

I was aware that the life of someone who followed Jesus was not a joyride. But it was a life filled with joy—the deep kind that doesn’t always show on your face but erupts in your heart and through your tears. It wouldn’t be a life full of ease, but would be a life full of hope—even when hope at times appeared far away. I was reminded of countless stories of God leading His people to places they did not want to go and could not begin to understand. And each story continually resulted in greater glory, and an unfolding and unseen-at-the-time plan of redemption. Jesus knew the whole story. He always knows the whole story. He knew my whole story. And He knows yours.

Hoping for the Greater Joy Ahead

Only one man lived His life knowing the whole story. Jesus. And even Jesus, right before He was to die, in the agony of knowing what would unfold, asked the Father to take this cup from Him. And still He declared, “Yet not my will but yours” (Luke 22:42 NIV). Paul sheds light on these words in Hebrews when he says, “for the joy set before him (Jesus) endured the cross, despising the shame and has sat down at the right hand of the throne of God” (Hebrews 12:2). Jesus could see the whole story. He saw the greater joy that would come from deep sorrow, and He submitted Himself to the Father’s plan. He not only knew the hope, He was the HOPE.

“I knew He was worth my life and worth following even through the darkest valley.”

My sorrow paled compared to what Jesus went through, and countless others before me. My faith did not feel very strong, but the object of my faith was the definition of strength. I knew He was good, I knew He was worth my life and worth following even through the darkest valley.

It was not my faith that strengthened me; it was the One who held all strength and power. I simply believed when He said, “He gives power to the faint, and to him who has no might he increases strength” (Isaiah 40:29 ESV). He would do just that. I had no idea how Jesus would do it, but somehow I was confident He would. Perhaps this is a part of how His resurrection power is at work in our mortal bodies.

From a Resistant to a Willing Heart

So, as the days and weeks passed and I would daily rise and through tears say, “I don’t want to go this way,” I heard His still, small voice say, “Follow Me.” And in my weakness I began to say so softly and timidly, “Lord, help me follow You through the places and to the places I do not want to go.” My resistant heart was melting to reveal a quiet resolve and willingness to go where God called, whether I wanted to or not.

“…I was able to receive what He had to give in the midst of the pain.”

It was in this surrender where God was inviting me to a deeper understanding of Him in ways my resistant heart would not allow. My resistance often kept my back turned toward God instead of bringing my pain to Him. And it was in opening my clenched fists, releasing what I could not control to His power and ways, that I was able to receive what He had to give in the midst of the pain. And He had so much to give.

It would be a daily releasing, a daily unclenching of my fists, and a growing daily awareness of what, in fact, my fingers were clenched around. It began as a releasing of my idea for my story and grew to include a releasing of my idea of who God was and how He works. Each time I released my pain to Him, I saw God meet me in the rawness. 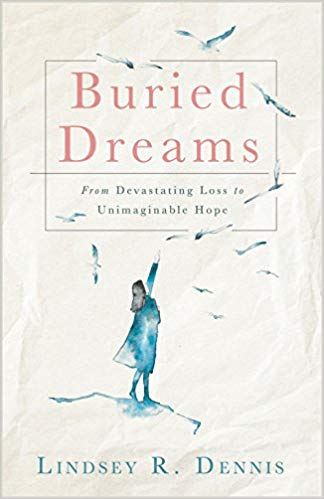 Adapted from Buried Dreams: From Devastating Loss to Unimaginable Hope. Used with permission.

Lindsey R. Dennis has worked with Cru for more than 15 years. She has served in international locations, as well as universities in the States, and takes great joy in getting to invest her life in students from a variety of cultures and backgrounds. Dennis also writes and speaks on what God has done to bring hope and healing in her life through the life and death of her first two daughters. Within a few weeks of learning the news of her first daughters’ diagnosis, she began to blog about her unfolding story of hope and loss. Within the first week she had thousands of views and within two years, she had 1.5 million pageviews and 400,000 unique visitors.Dennis loves to share with others what it looks like to know God in the midst of suffering and how to trust Him with the pen of their stories. In addition to her own blog, she is also a contributing writer for  ww.hopemommies.com and www.stillstandingmag.com. She lives in Orlando, Florida with her husband, Kevin. They have 4 children, Sophie and Dasah who now live with Jesus, and Jaden and Briella now in their arms.

NEXT: How God Can Restore Your Heart in Your Spiritual Desert Season
Allison Allen

How Do I Know I’m Saved if There Are So Many Doctrines and Denominations?
What Is the Curse of Ham, and Does It Impact Us Today?
Plus
But What If He Does: When God Challenges Your Faith
5 Celebrities Who Aren't Afraid of Being Christian
If Jesus Loves Me, Why Does He allow Bad Things to Happen?

Prayers for Healing to Pray for Sick Family and Friends
Plus
What Does it Mean to Experience God?
4 Proactive Ways to Hear from God
10 Powerful Psalms: Reminders of Hope for the Hard Times