Life after Salvation: Why the Second Half of the Story Matters
Tweet

Life after Salvation: Why the Second Half of the Story Matters

Life after Salvation: Why the Second Half of the Story Matters

One fine day God began showing me that there is a second half to the gospel story- and what He showed me changed everything.
Tweet

The stack of books on my nightstand for summer reading inches higher everyday. Some were recommended and loaned by friends, some borrowed from the library, and some sit caked in dust because I’ve put off reading them for so long. The majority of the stack, however, have scraps of paper jutting out from their pages--evidence that I’ve started reading them but never quite finished. They remain on my nightstand because I have this thing about finishing books: I want to give each book a fair shake, and reading just the first few chapters isn’t a fair shake in my opinion. The first few chapters don’t tell the whole story.

I suppose I have this thing about whole stories, because although I became a Christian when I was eight, for the 20 years that followed I only knew the first half of the gospel story. I knew that I was a sinner, and I knew that Jesus Christ died on the cross to forgive me of that sin when I confessed Him as my Savior, but I didn’t know how this act of death and resurrection affected my life after my initial salvation.

I hated that I continued to sin, that I failed God, that I couldn’t be good enough to prove my worth for what He’d done for me. I knew He loved me at the cross, but I felt certain He couldn’t love me in my ever-present state of failure and weakness. So I repeatedly cycled around to the first half of the story--the part that told me I was a sinner--and then, wallowing in that truth, tried desperately to make up for my imperfections with good behavior.

I thought that was the whole story: saved by grace, sanctified by working hard. But one fine day God began showing me that there is a second half to the gospel story--the part about life after salvation--and what He showed me changed everything.

Here’s what He showed me: “As you have therefore received Christ Jesus our Lord, so walk in Him” (Colossians 2:6). How had I received Christ? By faith in what He had done for me. Then why was I attempting to “walk in Him” with behaviors and good works, without any trace of faith or dependence on Him at all? Translation of Colossians 2:6: We’re saved by grace through faith and also sanctified by grace through faith. Any other way is the not the gospel.

The second half of the story is that God has known all along that we’d fail Him, and that we’d continue to fail Him after His sacrifice for us. It’s not that our sin doesn’t grieve Him, it’s just that He made a way to deal with it on our behalf, precisely so we could get on with the business of enjoying Him and He us. This is in fact the giddy delight to God toward us that is hard to see and believe when we dwell only in the first half of the story. When we begin to live in the second half of the story, however, we see it: God loves us wildly, He satisfies, and He offers us such beautiful freedom from sin, death, and our own inabilities to please Him.

We have to get through the whole story to understand these things about God, and when we do, suddenly the joy and peace Jesus promised, those intangibles that elude us in the discomfort of the first half of the story, come into focus.

It’s important to note that the first half of the story is largely about us and our sin, while the second half is about God and His actions on our behalf. Our thoughts and our focus, then, are a good litmus test to what part of the story we’re living in.

I talked about this with a friend recently who was beating herself up over her sin. She knew that she needed God’s grace, but she continually used words like “working to understand it” and “trying harder to remember to turn to God for it”. She spoke about all that she needed to do to receive and understand, but very little about what God does for her. She was entrenched in the first half of the story. I repeated back to her the words I was hearing and said, “Instead of climbing to get to God, you simply need to fall back into the ocean of His grace and love. Fall back and rest in what He’s done and is doing for you. Confess your sin, and rather than dwelling in it, receive His forgiveness. Receive His enjoyment of you, for you are His beloved child.”

That, sisters, is the whole story. Let us never stop reading it, thinking about it, believing it, and living in it. 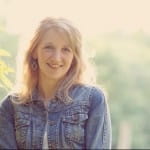 Christine Hoover is the author of The Church Planting Wife: Help and Hope for Her Heart. She has contributed to the Desiring God blog, In(courage), and Christianity Today, and blogs for ministry wives at www.GraceCoversMe.com. Christine and her husband Kyle, a church planting pastor, have three boys.

99 Small Ways to Communicate Respect to Your Husband
You Can't Rush Transformation:  7 Ways to Be Patient with Yourself (and Others)
When Trying Harder Just Isn’t Working Anymore
6 Tips to Master Your Media Consumption This Year