How Your Failure Can Actually Refresh Your Fellowship with God

How Your Failure Can Actually Refresh Your Fellowship with God

In order to accommodate his wheelchair, our neighbor Fred built a spectacular walking path around his pond. The path is adorned with gorgeous trees, grasses, and flowering plants. Its edge shimmers reflectively as glass globes bounce back the summer sunshine and evening landscape lights. Fred and his family generously allow our boys to enjoy this oasis. We love meandering along the path and catching frogs, minnows, and tadpoles in the pond.

One day, the globes proved to be too much of a temptation for Blaise. Before I could react, he picked one up and threw it as hard as he could. The globe cracked in two.

Well, find Fred we did. From behind the shelter of my legs, Blaise haltingly told Fred about breaking the globe, and that he was “sowwy.”

Fred’s response could not have been more generous. “It’s okay, little fellow, I’ve broken several myself,” he replied. Fred’s response in the next few weeks was a picture of grace. He came out to visit with the boys more often as they played around the pond, once remarking, “I sure was proud of the little fellow’s apology the other day.” A week or two later, he invited the boys into his shop to see a swing he’d purchased to hang on the trees near his pond. Fred’s boys are all grown, but he’d seen the swing and thought our boys might enjoy it. Blaise’s confession actually brought him into closer fellowship with Fred.

Repentance Draws Us into Closer Fellowship with God

The same is true for us. When we ask the Lord for forgiveness, grace flows down and we are drawn closer in fellowship with God. As 1 John 1:9 puts it, “If we confess our sins, he is faithful and just to forgive us our sins and to cleanse us from all unrighteousness.” The Lord already knows our deepest regrets, but when we transpar­ently offer them to Jesus, we become like little children crawling back up onto their parents’ laps.

In fact, the very concept of repentance encompasses not just a turning away from sin but a turning toward God. “Repent (change your mind and purpose),” Paul urges, “turn around and return [to God]” (Acts 3:19, AMPC). When we repent and turn toward God, our sins are “erased” and “times of refreshing . . . come from the presence of the Lord” (Acts 3:19, AMPC).

Confession brings light and life where there was darkness and decay. King David speaks eloquently about the God-effected tran­sition from the darkness of sin to the light of forgiveness:

For when I kept silent, my bones wasted away through my groaning all day long . . . I acknowledged my sin to you, and I did not cover my iniquity; I said, “I will confess my trans­gressions to the Lord,” and you forgave the iniquity of my sin. (Psalm 32:3, 5)

“When He looks at you, He doesn’t see brokenness; He sees Jesus’ righteousness.”

His is in the business of redemption. His is not a narrow, grudg­ing forgiveness but a broad, expansive, once-for-all forgiveness. He is the God who directed the whole course of human history toward one single purpose: your redemption and restoration. He loves you as you are, dear one, and when He looks at you He doesn’t see bro­kenness; He sees Jesus’ righteousness.

Just as Blaise’s confession brought him closer to our neighbor Fred, our confession brings us into a closer relationship with God.

“It’s only when we are weak that the cross of Christ can be our strength.”

Our failures can be the very means God uses to draw us close and to assure us of His unconditional love.

In fact, it’s only when we are weak that the cross of Christ can be our strength. Paul, a tentmaker by trade, wrote about Jesus pitch­ing a tent over him and dwelling upon him in his weakness (as translated in the Amplified Bible). Paul began by asking the Lord to remove his weakness, his thorn in the flesh. The Lord responded, “My grace (My favor and loving-kindness and mercy) is enough for you . . . for My strength and power are made perfect (fulfilled and completed) and show themselves most effective in [your] weak­ness” (2 Corinthians 12:9, AMPC). Paul ended by recognizing the Lord’s presence in the midst of weakness: “When I am weak [in human strength], then am I [truly] strong (able, powerful in divine strength)” (2 Corinthians 12:10, AMPC).

Paul determined to “gladly glory” (2 Corinthians 12:9, AMPC) in this weakness, not because he was a masochist, but because he knew himself to be at his best when he was weak; it was then that the strength and power of Jesus rested upon him. Paul experienced firsthand the upside-down nature of God’s Kingdom: It’s when we’re weak, when we’re insufficient and unable, that we’re truly able. It’s when we aren’t enough that we’re truly enough—through God’s empowering strength. His grace is always sufficient.

“It is okay to need Jesus.”

We can try our level best to keep everything under control, but the reality is that we need Jesus. This is good news because Jesus came to save the lost. When He lived on earth, Jesus did not hang out with the people who had it together but with tax collectors, prostitutes, and sinners, those the world looked down upon. The religious leaders were appalled and thought Jesus’ indiscriminate taste a black mark. But Jesus saw right through their self-sufficiency, saying, “It is not those who are healthy who need a physician, but those who are sick; I did not come to call the righteous, but sinners” (Mark 2:17, NASB). Jesus, in other words, is not put off by your need for Him, but rather came to earth in order to meet you in your need.

Dear one, it is okay to need Jesus. He already knows your struggles, and stands ready to pitch His tent over you and to dwell upon you. 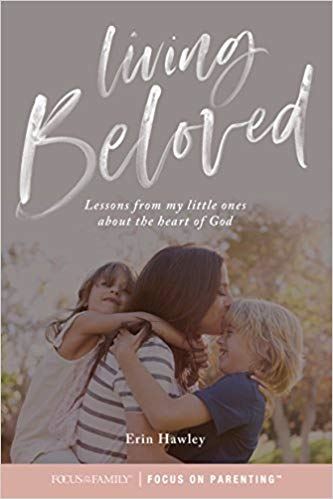 Adapted from Living Beloved: Lessons from my little ones about the heart of God. Used with permission.

Erin Hawley is a wife, mom to two small boys, and some-time lawyer. She is also an award-winning law professor at the Uni­versity of Missouri, Yale-trained constitutional lawyer, and counsel attorney to one of the country’s premier law firms. Erin clerked for United States Supreme Court Chief Justice John G. Roberts following law school. She is a nationally respected scholar who has published in numerous top law journals and popular publications, including the National Law Journal, the Legal Times, the Federalist, the Hill, Fox News, and the Washington Examiner. In addition, Erin is a frequent radio and television commentator, and routinely speaks to large audiences all over the country. Erin has been blessed to work primarily from home since the birth of her first child and is intimately familiar with the joys and struggles of working-mom life. She loves coffee-flavored lattes (but not coffee), being outside in the sunshine, horses and dogs, facilitat­ing Bible studies, and fellowship with other women.

NEXT: 3 Big Reasons Not to Leave Your Church (Even If You Really Want To)

Is it Impossible for the Rich to Go to Heaven?
10 Prayers and Meditations to Help You Wind Down at the End of the Day
7 Ways a Husband Can Show His Wife He Loves Her
20 Bible Verses about Healing that Only God Can Give

Amazing Children's Choir Sings 'I Can Only Imagine'
How to Praise God for the Breakthrough You’re Waiting to See
What Does the Bible Say about Guardian Angels?
10 Ways to Thwart the Sin of Infidelity
8 Ways Your Husband is Silently Showing He Loves You
10 Signs God Is Telling You to Step Back and Take a Break
10 Powerful Songs to Challenge Depression
10 Sins Jesus Condemns Most Harshly in Scripture
How Should Christians Talk to Their Kids about LGBTQ Issues?
3 Things Christians Shouldn’t Say during This Pandemic or Any Other Crisis
NEXT STORY

1
Amazing Children's Choir Sings 'I Can Only Imagine'
2
How to Praise God for the Breakthrough You’re Waiting to See
3
What Does the Bible Say about Guardian Angels?
4
10 Ways to Thwart the Sin of Infidelity
5
8 Ways Your Husband is Silently Showing He Loves You

Is it Actually Possible to 'Love One Another' in Such a Divided World?
Lia Martin