5 False Gospels within the Evangelical Church

The church has always been tempted to dull the sharp edges of the Christian faith, to abandon hard truths in the face of cultural and religious pressure. Passing a vibrant faith to the next generation is always a challenge, especially without the support of the government, the courts, the media, public schools, and the national zeitgeist that insists that we simply flow with the raging river of cultural opinion.

Listed herein are just five of the many doctrinal temptations the church faces.

Many people have been rescued out of sterile, joyless, and performance-based Christianity when they learn that we are not only saved by grace, we are also daily renewed and accepted by grace. They have been delivered from a life of rules without relationship and outward compliance without joyful obedience. Grace, once understood, is truly amazing, not just for great sinners but also for struggling saints. But today we are witnessing a perversion of grace in what we can call the Grace Movement: teachers and preachers who offer people grace in advance, even before they are convinced they need it.

God does not love everyone in the same way. He loves His people, those who are “in Christ” unconditionally, even as He loves His Son (John 17:20–23). But this does not mean that God is always pleased with our conduct; nor does it mean that God does not discipline us for our waywardness. Although God is kindly disposed to everyone and loves the world (John 3:16), “it is a fearful thing to fall into the hands of the living God” (Hebrews 10:31). And again, “Therefore let us be grateful for receiving a kingdom that cannot be shaken, and thus let us offer to God acceptable worship, with reverence and awe, for our God is a consuming fire” (Hebrews 12:28–29).

In the early twentieth century, many churches left off preaching the cross of Christ and replaced it with “doing good to their fellow man.” They justified their stance with verses from the Old Testament, such as “bring justice to the fatherless, plead the widow’s cause” (Isaiah 1:17) and similar texts in the New Testament, where Jesus taught that when we visit His followers in prison, we are visiting Him (Matthew 25:35–40). Social concerns replaced the finished work of Christ who died and rose again to save sinners, and the gospel of God saving us from sin was almost entirely neglected. In reaction, fundamentalists rejected the social gospel and, for the most part, confined themselves to the urgent need for individual conversion, neglecting the social implications of the gospel.

History is repeating itself today, but with a different twist. Many millennials, feeling as if they don’t fit with evangelicalism’s romance with conservative politics, have chosen to devote themselves to social justice, and sadly, many of them have abandoned the doctrine of personal repentance and opted for what they see as a more practical gospel, helping the poor and needy.

We are commanded to live radically like Christ, committing ourselves to the needs of others, body, soul, and spirit. But we must serve with a redemptive mindset, always seeking for opportunities to build bridges that will lead them to eternal life. We need gospel-driven social work that serves people because they are needy and because we want them to trust in Christ. If compassion motivates us to help alleviate the suffering in this present world, how much more should compassion motivate us to share the good news to alleviate their suffering in the world to come?

Many younger evangelicals do not feel at home in church. They gravitate to groups where they can be personally involved in honest sharing, caring for the poor, and ongoing relationships. Predictable formal worship services that follow a script often lack the vitality some of them are looking for. They are a “seeking” generation and uncomfortable with being told what to believe but are committed to finding a faith that is right for them.

Despite many admirable qualities, this generation is open to seeking spiritual experiences independently of Bible doctrine. Thus, in order to be more relevant, New Age spirituality, which is widely accepted in our culture, is often taught alongside biblical teaching in our evangelical churches and seminaries. In many instances, the textbooks used contain New Age teachings based on mystical experiences of God rather than the Scriptures.

Such books and others like them are popular because they present God as more accessible, more easily experienced without much need for specific Bible doctrines. However, we have to teach our people that the only sure knowledge we have of God is based on Scripture, which must be believed whether we experience God or not. We might learn some things about God when we experience the world, but only in the Scriptures do we have a reliable guide to lead us to encounter God and salvation. Sometimes we have no experience of God at all but, “We walk by faith, not by sight” (2 Corinthians 5:7).

False Gospel 4: The Gospel of My Sexual Preference

Is the evangelical church willing to practice the biblical teachings about church discipline? Most would say no. I spoke to one pastor who said they allow people into their membership wherever they are in their spiritual journey; unmarried couples who are living together, a homosexual couple with children, etc., are allowed to become members despite the church’s opposition to these lifestyles. But that church has concluded that those who become members must join in order to grow in their faith rather than saying, “Membership is not for you.” In short, this church was reluctant to raise the bar of church membership beyond vague generalities.

There is another reason why churches are reluctant to administer church discipline: they know the power of being shamed, despised, and targeted. They don’t want to be accused of being hateful rather than loving.

To all those pastors who fear that a loving but firm stand against same-sex relationships would brand your church as a hate group, and thus do damage to the gospel, put yourself in the shoes of the apostle Paul: just reread Romans 1:18–32, and remember he was writing to a church within a culture that was rife with defiling sexual sins of every sort. Yet he wrote candidly about God’s view of homosexual relationships, knowing his letter would be read publicly to the congregation. He knew that truth hurts, but it also heals (1 Corinthians 6:9–11).

Our culture has chosen to submit to Islam, and there’s pressure on the church to follow suit. Let me say from the outset that I am not opposed to those who engage Muslims in conversations about the difference between the two religions outside the setting of the pulpit. I have enjoyed such exchanges. Becoming friends with Muslims is a privilege given to us by the Lord. I am opposed to arguing, trying to prove who is right, and expressing words of condemnation. We should not attempt to win an argument but to win trust and show respect and caring. In fact, I’ve heard testimonies from Muslims who converted to Christianity, and all of these stories have the same theme: unexpected love and caring from Christians.

However, under the guise of tolerance, love, and some would even say, evangelism, Muslims are being invited into churches to present a special revised version of Islam. Interfaith dialogue in the church gives Muslim leaders an uncontested platform to speak publicly and invites them to present a version of Islam that simply does not exist in Muslim countries. Nor is it based on Islam’s history or its foundational writings.

If a church wants to learn what Islam believes, why not invite a convert out of Islam to come into a church and share his/her story? I’ve personally discovered that these testimonies are instructive and helpful to understand life in Muslim countries without the influence of Western values. We have much to learn, and there are many who can teach us.

As a means of evangelism, other opportunities exist for reaching Muslims with the love of Christ and the message of the gospel. Christians and Muslims can connect with each other in their homes, schools, neighborhoods, and workplaces. Jesus calls us to reach across the chasm and represent Him well wherever we find ourselves. This is the time for us to remember the words of Jesus to His disciples: “Behold, I am sending you out as sheep in the midst of wolves, so be wise as serpents and as innocent as doves” (Matthew 10:16).

Thankfully, we can count on the Good Shepherd to be among us each step of the way. 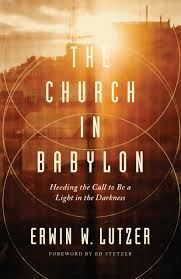 Adapted and abridged from The Church in Babylon: Heeding the Call to Be a Light in the Darkness by Erwin     W. Lutzer (©2018). Published by Moody Publishers. Used by permission.

NEXT: God Will Not Be Mocked: Comfort When You are Weary
Michelle Rabon

4 Truths for Moving Past Emotional Trauma
Plus
Crockpot Recipes Perfect for Cooler Weather
5 Examples of Adoption in the Bible
Christians Celebrating Halloween: Right or Wrong?
The History of Halloween