3 Surprising Facts We Have Overlooked About Martha

3 Surprising Facts We Have Overlooked About Martha

Have you ever felt guilty for being made more like Martha than Mary, from the Bible? Martha was a to-do list kind of gal—a woman who got things done—yet she often gets a bad rap, based on her exchange with Jesus, in Luke 10:38-42 (NIV):

“As Jesus and his disciples were on their way, He came to a village where a woman named Martha opened her home to him. She had a sister called Mary, who sat at the Lord’s feet listening to what he said. But Martha was distracted by all the preparations that had to be made. She came to him and asked, ‘Lord, don’t you care that my sister has left me to do the work by myself? Tell her to help me!’ ‘Martha, Martha’ the Lord answered, ‘you are worried and upset about many things, but few things are needed–or indeed only one. Mary has chosen what is better, and it will not be taken away from her.’”

While we don’t want to live in a state of stress or miss the mark, there was more to Martha than what we see on the surface.

Here are three surprising facts that we have overlooked about Martha:

1. Martha was loved by Jesus as she was.

In Luke 10:40-41, Martha is found serving, but based on Jesus’s correction, we learn that she is doing so from a place of distraction and worry. For centuries, those who identify with Martha have felt guilty for serving instead of sitting at Jesus’s feet, because Mary seems like the poster child for getting it right, but we have overlooked the fact that there is nothing wrong with serving.

How do we know this? Well, in John 12:2, we see that Martha is found serving again, yet Jesus does not tell her to stop or change her attitude here. This is His wink to us who are made like Martha. Our serving is not the problem, yet, sometimes our attitude while we serve is. Yes, there is a time for sitting, but that is not what makes us loved. Even when we have a bad attitude, Jesus’s love remains.

You Are Loved Because of Who Jesus Is

In Proverbs 3:12, we learn that the Lord disciplines those He loves. It is proof that we are his children. So, when Jesus gently corrects Martha, it is clear evidence of His love for her.

In case there is any doubt, John 11:5 plainly states that Jesus loved Martha and her siblings. You are loved too, because of who Jesus is—not based on whether you sit or serve.

Those who identify with Martha often feel like something is wrong with them because they are not wired like Mary—but let’s not confuse correction with rejection. Pointing out one behavior to improve upon is not the same as criticizing the totality of who a person is.

When Jesus told Martha that Mary had chosen the better thing, He was not saying that Mary was better than her—just that in this instance, Mary made a better choice.

You Don't Have to Change Your Temperament To Be Acceptable

In my book, Made Like Martha: Good News for the Woman Who Gets Things Done, the question is raised: What if Jesus wasn’t asking Martha to sit down physically? What if He was inviting her to sit down spiritually, even while her hands were busy—to let her soul rest in His love instead of trying to earn it through her behavior?

Freedom is found when we realize that we do not have to shed our efficiency or change our temperament in order to be acceptable.

Being wired to work is a good thing, yet we don’t have to wear ourselves out to be worthy. It is important to slow down and rest—we need to—but we can also walk confidently, knowing that we are not required to become someone else in order to be adored.

It exercises faith to go to Jesus with our frustrations and struggles. When Martha was feeling overwhelmed by the preparations necessary for her company, she went to Jesus to enlist some help. Okay, maybe she was tattling on her sister a bit, but she still knew who to go to for results.

In John 11:20-22, we see that Martha again goes to Jesus in her time of need. This time, the stakes are really high (much higher than the stack of dirty dishes in her sink). Her brother, Lazarus, has died, and so, when Jesus is on His way to the grieving sisters of Bethany, Martha goes to meet Him:

“Lord,” Martha said to Jesus, “if you had been here, my brother would not have died. But I know that even now God will give you whatever you ask.” -John 11:21-22

Martha had great faith. She believed that if Jesus had been there, He could have prevented her brother from dying.

Don't Let Your Frustrations Keep You from Jesus

In John 11:25-27, we see another important conversation between Jesus and Martha:

“Jesus said to her, “I am the resurrection and the life. The one who believes in me will live, even though they die; and whoever lives by believing in me will never die. Do you believe this?”

“Yes, Lord,” she replied, “I believe that you are the Messiah, the Son of God, who is to come into the world.”

Like Martha, I want to go to Jesus with my frustrations and not let those frustrations keep me from Him. I want to have faith, like Martha, that says, “Yes, I believe,” even when I find myself in grave circumstances.

If you are made like Martha, there is no need to apologize for it. Hold your head high, Jesus loves you as you are. He designed you to be a doer, and that is a good thing, indeed, yet, you do not have to overdo it in order to be enough. You can rejoice in what Christ has done on your behalf—meeting your not enough with His more than enough. Your soul can be at rest even while you work, knowing that by faith in Christ, you are a beloved daughter because Jesus has completed the biggest to-do of all time. 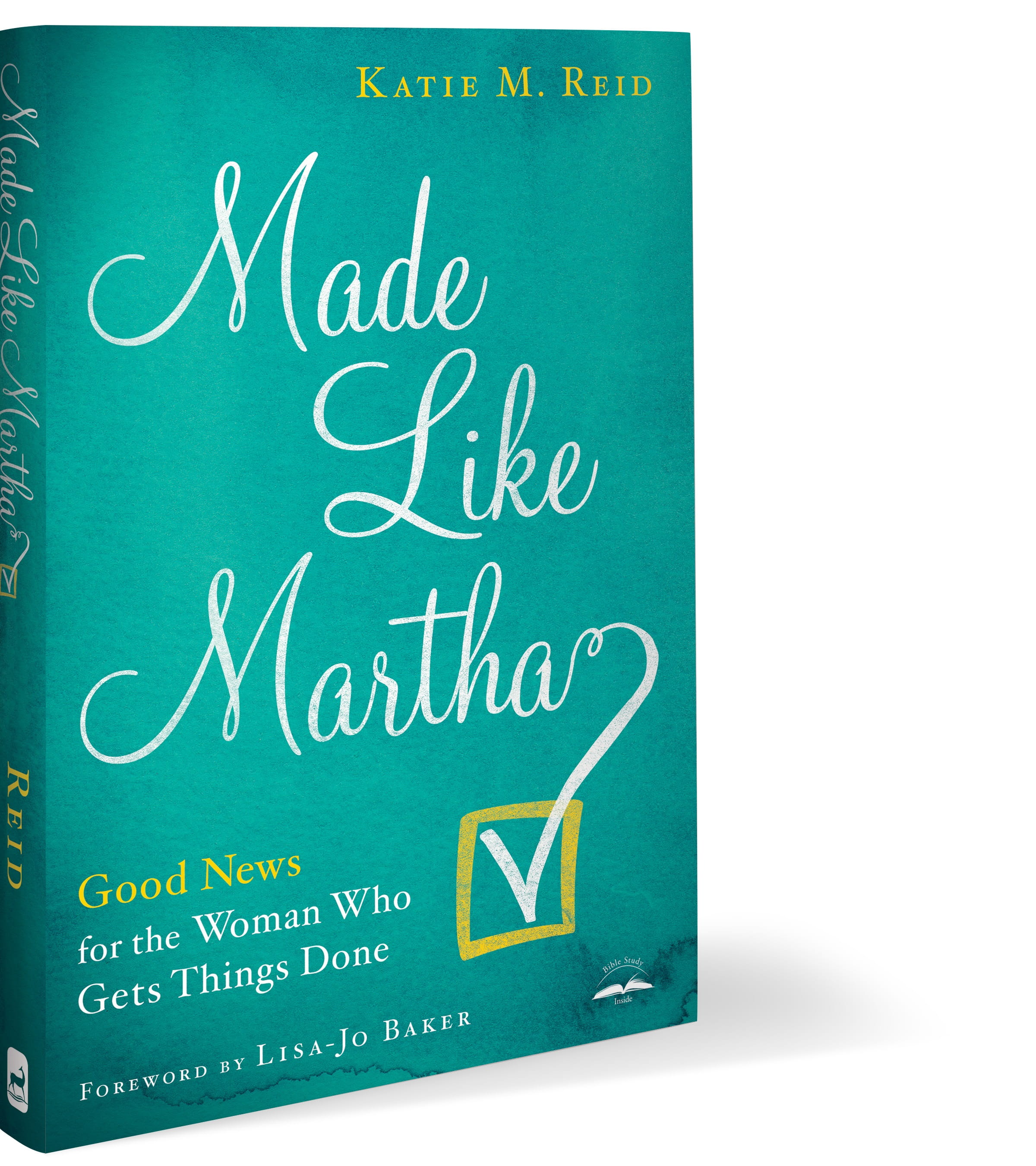 Head over to katiemreid.com/martha-resources to access the Beloved Daughter’s Decree, to help you remember what is true of you, in Christ.

Katie M. Reid is a national speaker, bible study facilitator, and author of Made Like Martha: Good News for the Woman Who Gets Things Done (which includes a 5-week bible study for individuals and groups). She encourages others to find grace in the unraveling of life at katiemreid.com Subscribe to Katie’s site to receive free resources to help you breathe deeply and walk freely.

What Adult Children Wish Their Parents Would Say to Them
4 Ways We Are Often Wrong about How Satan Works
Narcissistic Abuse: What it Is and How to Survive
5 Scripture-Filled Ways to Pray in the Face of COVID Variant Anxiety
8 Ways Your Husband is Silently Showing He Loves You
10 Things I Have to Tell Myself Everyday
4 Signs God Is at Work in the Chaos of COVID-19
7 Family Traditions That Help Kids Thrive
10 Names Every Christian Should Answer To
2 Biblical Tips on How to Celebrate the Good Things in Life
NEXT STORY

Bible Verses about Death to Comfort the Grieving

1
What Adult Children Wish Their Parents Would Say to Them
2
4 Ways We Are Often Wrong about How Satan Works
3
Narcissistic Abuse: What it Is and How to Survive
4
5 Scripture-Filled Ways to Pray in the Face of COVID Variant Anxiety
5
8 Ways Your Husband is Silently Showing He Loves You

10 Remarkable Roles God Can Play in Your Life
Quinnise Pettway